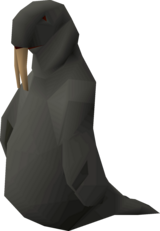 Wallasalkis can be found throughout the Waterbirth Island Dungeon. They attack with powerful Magic and their projectile resembles Water Wave.

Their magic attack can hit up to 30 damage, so Protect from Magic is highly recommended when fighting them. They may start to run away from the attacking player, similar to giant rock crabs, after being damaged to below half health.

Wallasalkis drops include the raw materials required for skeletal armour. They also drop various runes, similar to most magical monsters.

Drop rates estimated based on 56,349 kills from the Drop Rate Project, unless otherwise cited.

There is a 1/128 chance of rolling the rare seed drop table.

There is a 8/128 chance of rolling the talisman drop table.