Wanted! is the second quest in the Temple Knight series. Due to an oversight during your recruitment to the Temple Knights, you must now hunt down an extremely dangerous wizard and mass murderer named Solus Dellagar.

The start point at Falador Park.

To begin the quest, speak with Sir Tiffy Cashien in the Falador Park. Ask if he has any jobs for you, and he lets you know that a clerk has made an error and that you're not actually permitted to be a Temple Knight. It turns out you have to work as a squire for five years. Because this will take too long, Sir Tiffy offers an alternative by exploiting a loophole. He'll then ask you to go see Sir Amik Varze in the White Knights' Castle.

Note: If wearing Initiate armour during the chat with Sir Amik Varze, the dialogue will be different, but you may still go through the quest without it.

Speak to Sir Amik Varze by going up 2 flights of stairs, on the west side in the White Knights' Castle in Falador. He will ask you to become a squire after a small conversation. Decline his offer, and the conversation will continue. If you do not decline his offer to become a squire, he will ask for Asgarnian ale in an endless loop. Speak to Sir Tiffy Cashien to undo this.

It turns out that there needs to be a crisis for you to become a deputy, but there is no current crisis. Report back to Sir Tiffy in the Falador Park. For some players, Sir Tiffy will not say anything about a crisis until you have spoken to him a few times. Eventually, Sir Tiffy will inform you of a crisis that has arisen. Head back to talk to Sir Amik again.

Sir Amik will tell you the news that a criminal named Solus Dellagar, the "infamous murder-mage," is back. Sir Amik mentions they have been unable to capture Solus Dellagar due to his powers and, to only kill Solus Dellagar as a last resort. Join the White Knights, and accept the mission to pursue Solus Dellagar.

Once again, go back to Sir Tiffy Cashien. It turns out you're just the "agent" that needs to locate Solus Dellagar. As an agent, you need to be in constant communication. Sir Tiffy offers you a communication device for 10,000 coins, or he can make one if you bring the supplies. Give Sir Tiffy the money or the supplies (a law rune, an enchanted gem and molten glass). Either way, you'll receive a Commorb from him. It is needed for the whole quest.

Use the "contact" feature on the orb to talk to Savant. It turns out that you should investigate the Black Knight Hideout in Taverley Dungeon, and investigate the Mage of Zamorak in Varrock that is interested in Runecraft.

If you lose your Commorb after acquiring one, Sir Tiffy Cashien will lend you his.

Next, head over to the Taverley Dungeon.

Warning: The black knights are aggressive if you are under 67 combat; you can stand on the north-western corner of the room to hop worlds if you want to avoid them.

Continue through the double doors, and talk to Lord Daquarius in the south-western-most room. He tells you nothing. Savant will call you. (Use the contact option on the Commorb if she doesn't call automatically.) She advises you to try to bluff him into giving you something. Go kill a level 33 Black Knight to make Lord Daquarius give in and beg you not to kill any more of his men. He tells you that Solus Dellagar is in a place with a lot of fur, but that the fur is not from a bear.

Note: The Black Knight kill won't count if you kill it before talking to Lord Daquarius, if you leave the room after the kill, or if you get interrupted during the ensuing conversation.

Location of Chaos Altar in Varrock

Note: Do not equip any Saradomin or Guthix items (such as Void Knight equipment) or the Zamorak Mage will refuse to speak with you. In addition, if you have talked to the Zamorak Mage within the wilderness prior you can go straight to the Chaos Altar in Varrock.

Warning: The Wilderness is a dangerous place, proceed with caution and only bring items you are willing to lose.

If you haven't done the Abyss miniquest, bank all your items and follow the river between Edgeville and the Grand Exchange into the Wilderness to find the Mage of Zamorak. He will then tell you to meet him "somewhere" in Varrock, which is the Chaos Altar in the temple in south-east Varrock. Grab 20 unnoted rune/pure essence from the bank and head to the Chaos Altar.

If you have completed the miniquest, go directly to the Chaos Altar with 20 unnoted rune essence. (Note: He will not take Pure Essence Stating: "I will not haggle with you on my price." if you try and take him Pure Essence.)

Solus meets with the Zamorakian mage.

Talk to him about Solus Dellagar, and make sure you do not wear anything of Guthix or Saradomin (including Void). The Zamorak Mage wants your orb in return for information, but Savant explains that it would be useless to him. He offers to trade his information for 20 rune essence instead. Talk to him again with the unnoted essence. The mage gives your character the tip that Solus went east. Your character connects "east" with the previous tip, "fur," and realises that Solus must be in Canifis with the werewolves.

Either run to Canifis or, if you have completed Ghosts Ahoy, grab your Ectophial from the bank to teleport to Port Phasmatys and run from there. Alternatively, you teleport to the Slayer Tower using a Slayer ring and run south, or use the fairy ring code cks, or using Fenkenstrain's castle teleport tab to get nearby. 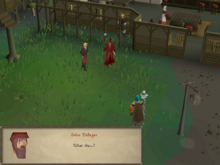 The player encounters Solus for the first time.

Once in Canifis, enter the bank and Savant will call you and tell you in a lengthy conversation that Solus is probably using a unique "slow teleport", which makes him invisible. If you accidentally keep running and skip the conversation with Savant, step outside the town back to the fairy ring and the conversation will trigger again. Now, use the "scan" option on your Commorb as you walk around the town until you uncover Solus Dellagar. Solus briefly appears, speaks with you, and disappears.

Savant then calls and finds that she is able to pull items off of Solus as he escapes. These items give the player a clue as to Solus' next whereabouts. From this point on, the player will be chasing Solus throughout RuneScape, and each time Solus is found, he will leave behind an item. That item is a hint for where to go next. There are seven locations in total, and each location is random, except for the Champions' Guild, the Dorgesh-Kaan Mine, and the Rune essence mine, which are always the second, fifth, and seventh locations, respectively. The items received for the first, third, fourth, and sixth locations are always random. Listed below are all of the items that may be received, as well as the location they point to. 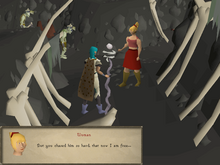 Solus disguises himself as a woman to distract the player. 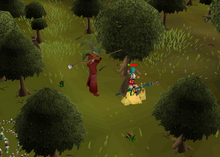 Solus Dellagar strikes the player with the Flames of Zamorak.

These items always appear in a predetermined order.

These items appear in a random order, and vary from player to player.

Solus Dellagar will also react based on which scan location out of seven the player is at.

The final clue will be 20 noted pure/rune essence. Bank and equip a weapon and armour for the final fight. Use any rune essence teleport spot you want, and Savant will close off possible teleports in order to trap him. After a small cutscene, Savant will summon 15 rangers to assist you, but Solus kills them all with Ice Barrage. 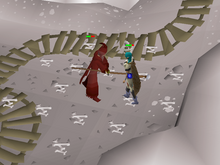 Go attack Solus yourself and kill him, and you'll get his hat. He's fairly easy as he has been weakened after using such a powerful attack on the Temple Knight rangers. He has no specific Combat level, has 40 Hitpoints and only uses a weak, but fairly rapid melee attack. After the fight, Savant congratulates you. You are returned to the rune essence teleport location. If you lose Solus's hat, contact Savant for another one. You will lose Solus's hat if your inventory is full at the end of the fight.

Return to Falador. Talk to Sir Amik Varze in the White Knights' Castle, and hand over the hat. He'll explain to you about the new armour system and killing Black Knights (and White Knights). 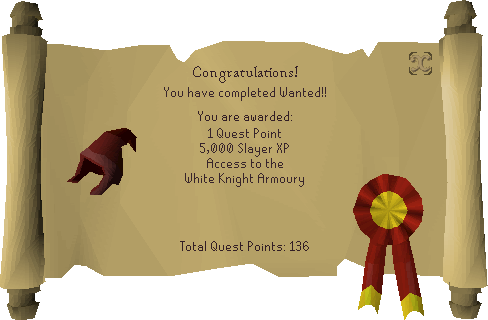 Wanted! is directly required for the following quests/miniquests:

In order to increase your ranking, you must kill a certain number of Black Knights. You start off as a Novice at 100 kills, and as you kill more knights, you'll grow in your rank. Killing Black Knights on a free-to-play server will raise your knight ranking.

With the completion of this quest, you'll have access to an entirely new type of armour: White armour!