Warding was a proposed skill that allows players to create magical robes and armour, as well as other magical items by using fabrics and vis. Warding was first announced at RuneFest 2018 and developed over the course of 2019, but ultimately failed to reach enough support in the polls and was never added to the game.

The development history of Warding includes the following updates: 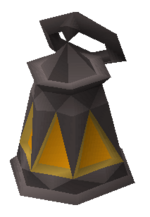 Channelling lamps can be bought at speciality shops. They are used for channeling vis, through wards, into materials that can create magically imbued equipment. They are also used to store any vis the player has gathered. The types of vis, as well as the amount that players can store, increase with their Warding level.

Vis are waxy substances used to draw wards where magical equipment can be created, similar to melee armour smithed at an anvil. Wards can be found across Gielinor, or created anywhere by a player using vis on the floor.

Vis can be obtained from dissolving items or casting elemental spells from the standard spellbook at the corresponding runic altar. It can also be purchased from speciality shops in small amounts. There are five types of vis: air, water, earth, fire and omni vis.

To obtain vis via casting spells, players must wield a channeling lamp; the rate in which vis is gathered increases based on the player's magic bonuses as well as the level of spell used. The type of vis obtained is also dependent on the spell cast, so casting fire spells will result in both air and fire vis. Omni vis can only be obtained by casting spells on the omni altar found in Arceuus.

Various silk, hides and cloth are used to create the equipment. Players can kill various monsters to obtain the materials, or use the Hunter skill to catch various creatures for them.

Players can also chop bloodwood and soulwood trees, requiring 65 and 80 Woodcutting respectively, for bloodbark and soulbark, which are also used as Warding materials.

Pado's robes are a degradeable set of robes that requires level 30 Magic, Defence and Prayer. In order to ward the robes, players must first learn to do so via Brother Jered in the Edgeville Monastery.

As a drawback, players cannot cast Flames of Zamorak while wearing Pado's robes.

Arceuus robes are a set of robes that requires level 30 Magic, 15 Defence and 20 Prayer, which resemble robes worn by the immortal inhabitants of Arceuus. In order to wear the robes, players must first complete the quest The Ascent of Arceuus.

Thaumaturge armour is a degradeable set of equipment requiring level 40 Magic to equip. When the entire set is worn, the set effect "Spellwarp" becomes active, which decreases the attack speed of combat spells from the standard spellbook from 5 to 4 (3 seconds to 2.4 seconds).

As the Thaumaturge warper is equipped in the shield slot, a tome of fire cannot be equipped to benefit from the Spellwarp effect.

Bloodbark armour is an improved version of the Splitbark armour which has similar defensive bonuses to adamant equipment. In order to equip bloodbark armour, players require level 55 Magic and Defence.

Dagon'hai robes are a set of robes worn by the Dagon'hai, requiring level 70 Magic and 40 Defence to equip.

Thammaron's robes are a degradeable set of equipment requiring level 60 Magic to equip. When the entire set is worn, the set effect "Thammaron's Fury" becomes active, which applies an additional 50% magic accuracy and 12.5% magic damage when attacking any NPC in the Wilderness. While the effect will stack with Thammaron's sceptre, the sceptre will not count towards activating Thammaron's Fury.

Astral armour is a set of magic armour requiring level 65 Magic and 40 Defence to equip.

Soulbark armour is an improved version of the bloodbark armour which has similar defensive bonuses to rune equipment. In order to equip soulbark armour, players require level 70 Magic and Defence.

Aside from magical robes and armour, players can also ward various items.

Combat ring imbues exist in-game as rewards from the Nightmare Zone minigame. These rings can be creatable via Warding using omni vis and the appropriate engraving, which would be rewards from a Warding focused minigame.

Existing imbued rings will not be unimbued.

Skilling rings are untradeable and degradeable rings which give a small chance to double the amount of resources obtained per action (no additional experience is given). Creating these rings will require an untradeable item obtained randomly while training a certain gathering skill.

Players can repair their essence pouches with abyssal silk, which can be obtained from abyssal creatures. This will be an alternative to repairing pouches via the dark mage.

Players can also use Warding to create a "fused pouch", which can hold 27 pure essence. It is created by combining all runecrafting pouches. Doing so requires 10 abyssal silk, omni vis, and all pouches, and requires level 85 Warding and Runecraft to make.

The fused pouch will have a 100 charges before breaking, leaving players with a degraded giant, large, medium and an undamaged small pouch. Players will not be able to obtain any kind of runecrafting pouch while they have a fused pouch.

Players can create pages for elemental tomes, which will be obtained as drops from bosses such as Obor and Bryophyta. The creation of elemental pages can be done with Warding, with the cost of vis to make these pages matching the price of burnt pages.

The following table lists the types of incantations, the Warding level required to create them, and the Magic and Defence levels required to equip them.

Incantations are an ammunition-slot item that grants small amounts of magic bonuses. Players will need papyrus, the appropriate talisman and certain vis to create incantations.

The incantations have the following stats:

The anti-poison lamp is an item equippable in the off-hand slot, created with level 20 Warding. It can be filled with anti-poison potions of all varieties, providing immunity to poison as long as there are charges inside the lamp. The lamp can also be upgraded into an anti-venom lamp, which would allow for anti-venom to be stored inside as well.

When venom or poison is cured via the lamp, ten charges will be consumed, in addition to receiving a five minute immunity to venom and poison.

Players will be able to craft three rune pouches with Warding and infinity silk (purchased from the Mage Training Arena), with the current existing rune pouch being renamed into the Wild rune pouch, which will only be useable in the Wilderness and cost less points. (Note: This was designed back when the Bounty Hunter reward shop was the only way to obtain the rune pouch.)

Players will be able to make scrolls of redirection, used for making redirected house tablets, by using papyrus, a teleport to house tablet and omni vis. The scrolls will be made tradeable and removed from the Nightmare Zone shop.

The Warding minigame, Mystical Sleuthing, will be a hybrid training method for Warding and Runecraft. It will require completion of Rune Mysteries and the introduction Warding quest that comes with the core skill. Players will also need a channeling lamp, vis, and any Runecrafting Talisman/Tiara that is useable for their Runecrafting level. Talismans that are currently unobtainable will be made to accommodate this minigame.

The aim of the minigame is to utilise Warding and Runecrafting to help citizens of Gielinor deal with magical problems and threats. Players can start this by getting a mission from various wizards, where players will then be given a location to investigate.

Once investigated, players will tackle the threat by making the appropriate ward. This ward will then turn the threat into a hard-rocky magical residue that can be siphoned into runes via their talisman.

A new reward shop is an option for this minigame, which can sell the engravings used to create imbued combat rings.

A Warding guild brings in the ability to add more content to the skill whilst expanding on the reasoning behind it with new NPCs, lore, and dialogue. The guild will also offer a Cupboard, which acts like a seed vault that stores various pieces of silk, bark, and hides. There will also be a bank at this guild that allows easy access for training Warding.

This section will note some core changes made to warding between the first pitch and the final poll blog.

A chalky mineral mixed with vis. Used to draw wards. There are two types: elemental and catalytic, both types are created by the player via a channeling lamp.

In the final poll blog, the wardstones concept was abandoned, and drawing wards would be done with vis instead.

Used for channeling vis through a ward and into raw materials to create magically imbued equipment. The most basic channeling lamp can be purchased from a general store for a few gold pieces. Lamps can be used to store any vis the player has gathered; higher tier lamps are able to store higher tiers of vis.

In the final poll blog, the channeling lamp variants were reduced from 3 to 1. This remaining channeling lamp could be purchased from any rune or ward shop for a few gold pieces.

Robes or armour created via warding that have a specific unique buff. These degradable Battlemage Robes, which will also be available to free-to-play, will come in Air, Water, Earth, and Fire variants. The set includes a mask, and a robe top and bottom. All parts need to be worn for the set effect to work: increasing the speed in which spells of the standard magical spellbook are casted.

The name of these robes was changed to the Thaumaturge set for the final poll blog. It was not specified if this set would have come in multiple colours and if it would have been available in free-to-play.

In the final poll blog, these armours were abandoned.

A giant chunk of Runestone that aids with warding. Here players can channel equipment without having to draw their own ward. Casting magic upon the Runestone Monolith can generate small amounts of vis.

In the final concept of Warding, Runestone Monoliths would be located in wardshops. They could be used as magical training dummies. When a successful combat spell is cast upon it, a small quantity of vis of that element is created.

There are two new types of patches to gather fabrics that utilises the Farming skill, flax patch and magnanery.

This comes to at least five new flax seeds and over seven types of larva to collect and train farming with.

In the final concept of warding, these incorporations with the Farming skill were abandoned, and instead some new unique Hunter methods were introduced.