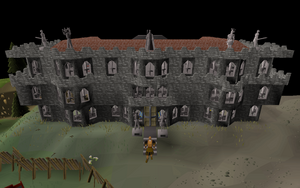 The Warriors' Guild is a large building located just west of Burthorpe, founded by Harrallak Menarous. In order for the guild's door guard Ghommal to allow you entry into the guild, a player's Attack and Strength levels must add up to at least 130, or they must have one of these skills at level 99 - boosts cannot be used. Inside the guild, players may play various minigames related to melee combat. When players perform well in these minigames, they are rewarded with Warrior guild tokens, which are used to gain entry to the top floor and basement of the guild and kill cyclopes for defenders. Players who have achieved level 99 attack do not require tokens to access the cyclopes, and can enter for free while wearing an Attack cape.

The Warriors' Guild is located in Burthorpe and can be accessed in a number of ways:

The animation room of the Warriors' Guild, created by Shanomi, is located on the ground floor[UK]1st floor[US], southwest of the Guild entrance. This room is one of the most commonly used rooms out of the whole guild to gain tokens. Players must bring a set of metal armour, such as bronze or mithril, consisting of a full helmet, platelegs, and a platebody. To begin the minigame, the player must click on the animation machine with the full set of armour in their inventory, or use one of the pieces of armour on the machine. The armour will come to life and begin attacking the player. Upon defeating the animated armour, the player may pick their armour set up again along with tokens for defeating it. Higher-level armour sets are stronger but reward more tokens upon defeating them.

Animated Armour sets are immune to ranged and magic attacks, as well as poison and venom, so players must defeat them in melee combat.

Note that you will NOT lose the armour if you die while fighting its animated state, since you can retrieve it by talking to Shanomi.

A table of each armour set follows:

To determine what is the most efficient way to receive tokens, one must consider to take the amount of tokens per hitpoint into account. While the rune suit may drop 40 tokens per kill, the black set drops exactly as many tokens per hitpoint, and has a considerably lower defence level. This means that players may receive more tokens per hour if they kill black armour suits rather than rune ones. While steel suits give the highest number of tokens per hitpoint, the helm can be destroyed, potentially making it less viable for tokens. Also, high level players should take keep in mind that their DPS probably makes it far more click intensive to kill low level armour suits, because they will have to constantly reanimate the suits after just one or two successful hits.

Because of the time it takes to reanimate and kill higher level armours, it is most efficient to kill black animated armour sets for the following reasons. 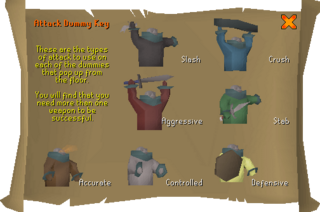 The dummy room of the Warriors' Guild, created by Ajjat is located on the ground floor[UK]1st floor[US], northwest of the entrance. There are no requirements for this minigame; however, it is a good idea to bring melee weapons of all types and styles — stab, slash, crush, accurate, aggressive, defensive, and controlled. This room tests players' reflexes with attack styles by creating various dummies. To defeat these dummies, players must choose the correct attack method to destroy them. Players should look at the poster inside of the dummy room for more information on what styles to use for each dummy. Each dummy correctly hit will reward players with 15 Attack experience and 2 warrior guild tokens.

There are seven dummies in the dummy room, covering all four combat styles (defensive, aggressive, accurate and controlled) and all three melee attack styles (slash, crush, and stab). As a result, choosing the right weapons for this minigame is important. One is required to have at least two weapons to be able to hit every dummy. The best strategy is to bring one weapon that can hit all but one dummy, and another weapon that will deal with the last dummy. For example, a longsword will be able to hit all dummies except for crush, in which case the player could carry a warhammer for the crush dummy. A mace can hit all dummies but slash, for which the player could carry a battleaxe. Whatever combination is decided upon, it should be kept in mind that the attack bonuses for the weapon do not help in this minigame; therefore, it is as easy to obtain tokens with a bronze longsword as it is with a dragon one. If a player does not have the ideal weaponry for this minigame, they can visit Anton on the 1st floor[UK]2nd floor[US] to buy appropriate weaponry. Note that unarmed combat counts as a crush weapon.

This game can be tricky at first. Try to memorise which type of dummy appears in each slot, as they never change slots.

The catapult room of the Warriors' Guild, created by Gamfred, is located on the 1st floor[UK]2nd floor[US], west of the Armoury. To begin this minigame, players may speak with the dwarf outside of the room to obtain a two-handed defensive shield. This shield can only be equipped while standing on the target area. Once the shield is equipped, participants should look at the ammunition being shot at them and observe the panel which replaces the inventory, then select the appropriate defensive style. Each time players defend successfully, they will receive 10 Defence experience and one token. Though this minigame is arguably the easiest at which to be successful, its token payoff is relatively low.

The shot put room of the Warriors' Guild is located on the 1st floor[UK]2nd floor[US], in the northeast corner of the guild. To begin, players pick up a cannonball and select one of the three throwing styles. If a player fails, they will drop the ball on their toe, losing HP in the process. To reduce this use, one may use a pestle and mortar with ashes to get ground ashes, then use the ground ashes on their hands. Upon succeeding on the put, the player will gain Strength experience and tokens. The number of tokens received is calculated as follows:

Each throw will reduce the player's energy. As the player's energy lowers, their distance will degrade, until finally, below about 10% energy, one is unable to throw. Waiting for energy to regenerate, using energy potions, strange fruits, or sq'irk juice will allow the player to participate again. Another option is to throw shots until energy is depleted, and then move to a different minigame while regenerating energy. A good tactic if energy potions are available is to throw one ball, restore all energy lost, throw another, restore all energy, and repeating until out of potions, then using up all remaining energy. This can yield a large amount of tokens.

Jimmy's Challenge is located on the 1st floor[UK]2nd floor[US], east of the Armoury. To begin, click on a keg in the room. You will balance the keg on your head and can go on to select another keg, up to a maximum of five. Balancing the kegs will award Strength experience but will cause damage to you if you lose balance. You will receive 2 tokens for every barrel successfully picked up. To receive tokens, speak to Jimmy for a signature and then speak to another games master. If you walk out of the room with barrels on your head, they will disappear.

Pick up one keg and drink energy potions every time your run energy goes down. It is not worth it to pick up several kegs.

On the top floor of the Warriors' Guild is a large room where you will find about fifteen Cyclopes, which may be either level 56 or 76. This is where players can earn the defenders, which have some of the best Strength and Attack bonuses of any shield slot item. Entry to the Cyclops room requires a minimum of 100 Warrior guild tokens. 10 tokens are spent upon entry to the room, with another 10 spent every following minute in the room. If players run out of tokens whilst inside the room, Kamfreena will give a warning to the player to exit the room. If the player doesn't, they'll be teleported out after a minute passes and unable to re-enter until they obtain more tokens.

If the player has 99 Attack, wearing the Attack cape before entering the Cyclops room will allow the player to stay in the room free of charge as long as the cape is equipped.

On your first entry you can receive a bronze defender as a random drop from Cyclops. Each time you pick up a new defender, make sure to leave and re-enter the room to be able to acquire the next-strongest defender. Cyclopes in this room drop up to the rune defender and have a 1/50 chance to drop one.

Players can only attack the cyclopes with Melee attacks, as they are immune to Range and Magic attacks. Salamanders will only work if the attack style is set to Scorch (trains Strength).

In the basement of the Warriors' Guild, accessible by a trap door west of the guild (exit through the food shop), is another large room containing level 106 Cyclopes. Lorelai will require you to have a rune defender in your inventory before she will allow access to the room. You will be able to re-enter this room without showing a defender after unlocking access to it the first time. Only the Cyclopes that are located in the basement will drop the dragon defender. Entry to the Cyclops room requires 100 Warrior guild tokens. 10 tokens are used upon every entrance, and then 10 tokens are charged for every following minute you stay.

If the player has 99 Attack, wearing the attack cape before entering the basement Cyclops room will allow the player to stay in the room free of charge as long as the skillcape is equipped. 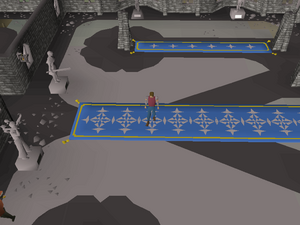 The spot to dig for the clue.

Digging in the middle of the entrance hall is a solution to an elite cryptic clue: W marks the spot.

The Warriors' Guild has many shops to aid you in playing the minigames or fighting Cyclopes.

Anton, located on the south wall of the 1st floor[UK]2nd floor[US], runs the Warrior Guild Armoury. Anton buys and sells just about every weapon dropped by Cyclopes.

Note that Anton does not trade black knives, which are a very common drop of Cyclopes, or defenders, which are non-tradeable.

Jade is a banker, located in the southwest corner of the ground floor[UK]1st floor[US] of the guild. Jade gives you full access to your bank account.