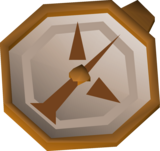 A watch is an item for solving coordinate clues whilst on Treasure Trails. A chart can be obtained by first talking to the Observatory professor (who may be at the Observatory or the nearby Observatory reception building to the north-west, depending upon whether the player has completed the Observatory Quest). After talking to him, you have to receive the sextant from Murphy at Port Khazard in order for Brother Kojo to give you one at the Clock Tower.

After first obtaining a watch from Brother Kojo, the player may thereafter make watches with at level 28 Crafting or higher. A watch can be made by having one steel bar and one clockwork in the inventory and clicking on a crafting table 4 at the Workshop of a player's house. Making a watch will give 15 Crafting experience.