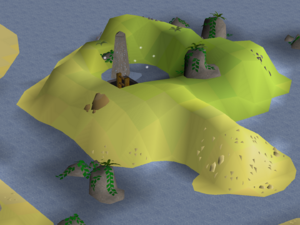 The Obelisk of Water on its small island off the Catherby coast.

The Obelisk of Water (referred to as water obelisk in the standard spellbook) is used to cast the Charge Water Orb spell; the spell must be cast on the obelisk, not on an orb. It is used for enchanting an unpowered orb into a water orb, requiring level 56 Magic, granting 66 Magic experience. The obelisk is located on the island across from the shore of Catherby, reached by climbing a ladder at the end of Taverley Dungeon by the black dragons.

The location of the ladder in Taverley Dungeon that leads to the Obelisk of Water.
Retrieved from ‘https://oldschool.runescape.wiki/w/Obelisk_of_Water?oldid=14200629’
Categories:
Hidden category: