Waterbirth Island is a crescent-shaped island accessible from Rellekka's westernmost pier by talking to Jarvald. The island itself contains several spawns of Rock Crabs, one of the most popular training monsters, and a few hobgoblins. However, the main attraction of Waterbirth Island is its huge dungeon, filled with dangerous creatures such as dagannoths, wallasalkis, Giant Rock Crabs, and rock lobsters. Many players go to this dungeon to fight the three Dagannoth Kings or to get the pieces needed for Fremennik armour. Snape grass is also very plentiful here.

Getting to the island[edit | edit source] 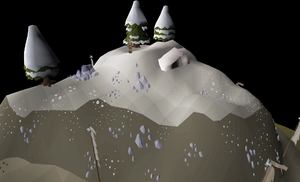 Askeladden atop the central mountain.

There are not many creatures outside, just Rock Crabs and a few hobgoblins. However, near where the boat lands, there are quick respawns of snape grass.

The island plays an important role in Fremennik mythology, featuring as the main subject of stories like "the tale of the broken sky" and "the day of the green seas".[1] In recent times, the island had been free of the dagannoths that currently infest its caves, as Fremennik warriors had driven them back into the sea at an unspecified point in the past.[2]

A short while ago however, the creatures once again landed on its shores, likely after being hatched somewhere under the sea by a dagannoth queen.[3] This development seems to be embraced by at least some of the Fremennik, for whom the battle against the dagannoths holds a place of cultural significance.[4]

The first part of the dungeon is involved in the making of Fremennik armour. The deeper and more dangerous part will get you to the Dagannoth Kings.

The main room of the dungeon.

Go west and then south to the dungeon entrance. As soon as you enter the Waterbirth Island Dungeon, you will be in a massive cavern filled with level 90 Dagannoths. They use melee attacks and are very dangerous (they will hit you over and over without the Protect from Melee prayer). They sometimes drop dagannoth hides used to make Fremennik armour.

To continue you must have a companion, or a pet rock. Run east to the back of the cavern to one of three large, circular portals. Have one person stand on each of the two floor plates and open the door, or drop your pet rock on one floor plate and stand on the other yourself (you can pick your pet rock up before going through). Depending on which door you choose, you will find the following monsters with one of three attack styles:

These creatures also drop raw materials for the Fremennik armour.

Sublevels 2-4 of the dungeon.

Sublevel 5 of the dungeon.

Each of the three paths leads further east to a central room blocked with a door held up by props. The props can be knocked down with either Magic or Ranged. You can open the door of the other two paths, but only another player who has gone down either of the other two paths is able to knock down the prop of the door blocking your way. You can also use the special attack of a rune thrownaxe to open all blocked doors.

Once you are in the central room, you can use the ladder to go down to five more sub-levels with passages leading to the Dagannoth Kings. Askeladden and a safe area is up the ladder to the top of the snow covered mountain in the east part of the island.

After the ladder leading to the Dagannoth Kings, the player may take an alternative exit going east up to the Lighthouse. The exit is located in the last room of rock lobsters, furthest east. It is one-way out only. Exiting here is a task for the Medium Fremennik Diary.

Below is a quick overview of the Waterbirth Island Dungeon and the rooms and protection prayers that should be used in each room.