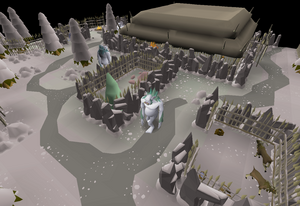 Weiss is an ice troll settlement located in the North. Many years ago, a rogue tribe of ice trolls, led by Mother, attempted to invade the Keldagrim Mines. With vital support of the then-young Wise Old Man, the Black Guard managed to drive away Mother and his tribe of ice trolls, forcing them to flee northwards. Now, the tribe lives in Weiss, still holding a grudge against their mortal enemy, the Wise Old Man.

During the quest Making Friends with My Arm, the player and My Arm attempt to establish trade with the Weiss trolls, after Mother sent Wolfbone to the Troll Stronghold. During this trip, My Arm falls in love with Snowflake, the daughter of the tribe's leader, Mother. In an attempt to impress him, a plan is devised to have the Wise Old Man "dead" before Mother via the use of a cadava potion. However, he sees through the trick and plans to execute the player, the Wise Old Man, My Arm and Snowflake. The group puts up a fight and successfully kills Mother. Snowflake then takes over as the leader of the Weiss trolls, with no opposition as the trolls all agree she is nicer than Mother.

Weiss can be reached via three ways:

You must partially complete Making Friends with My Arm to access Weiss.

The salt mine is found under Snowflake and My Arm's hut, where players can mine various salt, which can be used to create fire pits and basalt teleports.

While efh, te and urt salt are stackable, basalt is not; players can return upstairs and speak to Snowflake to have them converted into bank notes.

There is an iron pickaxe spawn in the mine next to the salt rocks.

There is also a disease-free herb patch much like the one on the Troll Stronghold roof.

In order to make use of it, players must first build a fire of nourishment, requiring 2 mahogany planks, 2 steel bars, 100 efh salt, 50 te salt and 150 urt salt. A hammer, saw and tinderbox are required as well.