The Well of Goodwill was a special well located east of Varrock West Bank. Players could donate coins or items (which were counted for their value in gold coins), and for every million coins donated, Jagex donated one dollar to a charity listed on the well's interface.

It only accepted certain items, and coins in multiples of 1,000. 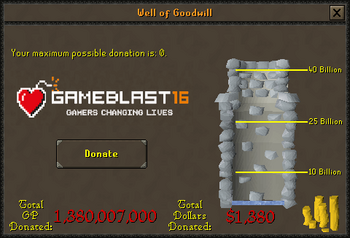 Once these milestones were hit, the above rewards were unlocked for everyone in Old School.