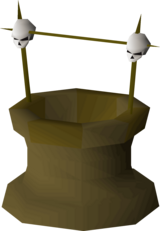 The Well of Voyage (also known as the Well of the Damned up until starting Regicide) is a well that allows transport between Tirannwn and Kandarin, located in the Underground Pass in Iban's Temple after he is defeated. It was constructed by the elves in the Second Age as a means of expanding their land, but it was captured and corrupted recently by Iban and cannot be used even after completion of the Underground Pass quest. Regicide must be started for the player to go through. When the player climbs into the well, they are transported between Iban's throne and the final cave chamber before the entrance at Tirannwn. It can be used in either direction.

The player uses the Well of Voyage during Underground Pass to destroy Iban by throwing a doll impregnated with his blood, shadow, ashes and the crushed bones of a dead dove within, as Iban twisted the well's magic so that anything thrown into it would be sent to the darkest realms of Zamorak, thus by throwing the doll of Iban, the player manages to send Iban's soul into the domain of his "father". After doing this, the Underground Pass quest journal says: "(...)Knowing how forgiving Zamorak is, I doubt I'll be seeing him again."

When the player starts the Regicide quest, they receive a message from King Lathas telling him to meet in Ardougne. Once there, the king explains that his wizards have finally finished fixing the Well of Voyage, allowing the player to travel to Tirannwn and kill Tyras. 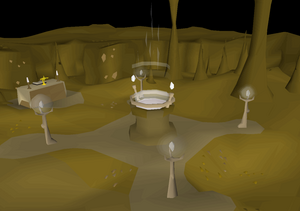 The well inside the Underground Pass.
Retrieved from ‘https://oldschool.runescape.wiki/w/Well_of_Voyage?oldid=14268992’
Categories:
Hidden categories: