From Old School RuneScape Wiki
Jump to navigation Jump to search
The RuneScape Wiki also has an article on: rsw:Werewolf Skullball
Not to be confused with Werewolf Agility Course.

Werewolf Skullball is an activity that trains Agility. To enter, you must have an Agility level of 25, completed the Creature of Fenkenstrain quest, and be wearing a ring of charos. The course is found near Canifis by going south-east of Mazchna the Slayer master, who can be found north-east of Canifis. Leeches are in this area and are aggressive to players under 105 Combat. You should find a werewolf in a small hut in the swamp; speak to him and climb down the ladder to enter the Werewolf area.

Speak to the Skullball Boss to start a game of Skullball. It's a kind of progressive soccer, except for the fact that your ball is actually a Skull. The faster you shoot the Skull through each of the 10 different goals, the more experience you'll gain. There are 3 options that you can use when playing:

You will gain 750 Agility XP if you complete the game in under 4 minutes. For every 3 seconds over 4 minutes, you'll lose 8 XP.

The Skullball Trainer can inform you as to what to do and keep track of how many goals are left. 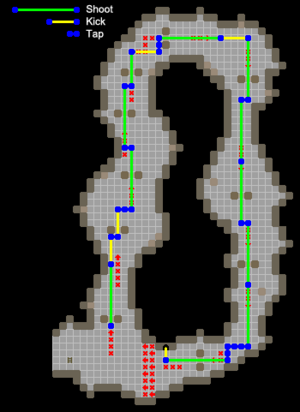 Note: The following route is only one of many that can be taken through the course. The player may wish to experiment with alternatives.

To start the activity, speak to the Skullball Boss near the ladder down into the arena. The ball will come out of one of four chutes on the wall south of the first goal, but the timer does not start until the ball is kicked through the first goal, so the player has plenty of time to position the ball before starting the activity.

Provided the player has plenty of run energy, it is relatively easy to achieve the maximum experience without any planning and just simply scramble the ball to the finish line through each goal. However, the following route can be used to obtain faster lap times and therefore more experience per hour. The route can even be walked and still completed fast enough to yield maximum experience.

To begin the route, use the tap and kick actions to position the ball between the first arrow on the ground and the centre of the first goal. The timer does not start until the first goal is scored, so there is no need to rush this part. Once the ball is in place, the table below can then be used to guide the player through the route.

The table above summarises what is shown in the diagram. At the 5th goal, the skullball bounces off the wall and lands in the spot indicated. Alternatively, one could kick the ball north and then tap the ball north, but this is a much slower approach.

The following table shows some approximate times for a lap using each method.

Alternative 1: Instead of manually and slowly positioning the Skullball in the front centre of the first goal, tap the ball until it is aligned with the red markings and then just shoot through it from any distance and then shoot again to let it end up at the left front of the second goal. This avoids lots of manual tapping before starting the course.

Alternative 2: Instead of tapping west three times for the 10th goal, shoot the Skullball to the east against the wall. It will bounce off the wall and end up in the same position as if it was tapped west three times.

With more effort, times as fast as 2:00 can be achieved. Mark each target square where the ball should be for each hit, run to each adjacent square and right click the ball as fast as possible, and hit the ball 1-2 squares before it reaches each target square to redirect it while it is still moving. Steps differing from the recommended route are in bold.