West Ardougne is a members-only city and part of the capital of Kandarin. It is only available to players who have partially completed the Plague City quest. It has been badly stricken by a mysterious plague which has been claimed to have been brought into the city on its king's last visit. This plague is deadly and will kill anyone who is not wearing appropriate clothing while inside the city. Its neighbouring city, East Ardougne, is an opposite, being one of the wealthiest cities in RuneScape. West Ardougne is ruled by King Tyras, although he left the city just before the plague struck to adventure the forests of Tirannwn.

In addition to the plague, West Ardougne is also known for containing the entrance to the Underground Pass.

There are very few ways to enter West Ardougne:

There are some interesting places in West Ardougne to explore.

The Civic Office is the government body of West Ardougne. It is managed by Bravek, the city warder, and it is in the centre of the area. 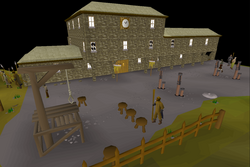 West Ardougne's town square, with bath pipes and gallows in front of the Civic Office.

The West Ardougne General Store supplies normal general store items. It is operated by Chadwell in the south-west part of the city.

A graveyard with many tombstones. Ghosts and Zombies patrol the yard but are quite low levels, and the numerous tombstones make it difficult to get from one monster to the next. This can be countered by using ranged or magic, which allows you to use the tombstones to your advantage. This makes the zombies an underrated spot to train ranged or magic at medium levels, or for someone seeking a champion scroll.

The Saradominist West Ardougne Church. It contains an altar to recharge your Prayer points.

A housing area containing Men, Women, Rats, NPC children and NPC civilians. If you talk to one of these civilians, they will buy a cat or overgrown cat from you for 100 death runes (200 if you have completed the easy Ardougne Diary). It is located near the graveyard.

There are no quests to start in West Ardougne, but the city is involved with the following quests: