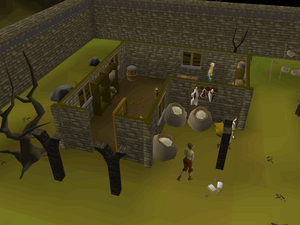 The West Ardougne General Store is run by Chadwell in West Ardougne. It is where most of the city's populace get their food from.

The store sells items that all other General Stores sell with the addition of food. The store is convenient for players who wish to go through the Underground Pass, as it carries nearly everything that they will need - a bow, arrows, and two ropes. The only two things the shop is lacking for this are a plank and a spade.

This shop buys items at 55% of their item value initially, unlike the 30% of most other general stores. This is only slightly lower than the Rogue's Den and the Wilderness Bandit Camp general stores, which start at 60% item value (equivalent to the high alchemy rate).