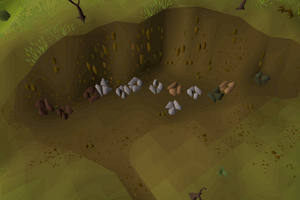 The West Falador mine is a located west of Falador and south of Taverley. The mine features two copper, six tin, three iron, and two coal rocks.

Players needing to bank their ores may walk south-east to a crumbled wall on the borders of Falador, climb over it, and walk a very short distance to the Falador west bank. Players need to have at least level 5 Agility to pass over the crumbled wall. An alternative banking method is heading south of the mine to the gate near the Make-over mage, and going east and then north to Falador. Either way, this makes the mining site very convenient for players.

The mine, despite its short banking distance, is rarely used by players. This, however, makes it convenient for power miners who want little competition for rocks and the ability to easily bank their ore. It can also be used as a site to use the spell Superheat Item on coal and iron to make Steel bars with little competition. Due to its distance from a bank, this spot is a great way for low levelled miners to train.