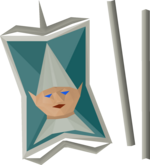 The Western Banner 3 is a reward for completing the hard Western Provinces Diary tasks. It is received from the Elder gnome child in the Gnome Stronghold and can be retrieved from him for free if lost. Its combat stats are identical to a mithril spear.

The banner depicts a Gnome child.