What Lies Below is a quest that deals with the Dagon'hai, an order of powerful Zamorakian mages. During the quest you team up with the Varrock Palace Secret Guard to help capture Surok Magis.

Speak to Rat Burgiss on the crossroads between Varrock and Lumbridge. He tells you that a bunch of outlaws have ransacked his trading cart and that he needs you to get back the five papers they stole from him. He will give you an empty folder to keep them in.

The outlaws are located between Edgeville and the Grand Exchange. You can use a Skills necklace or Ring of wealth to travel towards them. Once at the camp, kill five outlaws (level 32) to retrieve five of Rat's papers, and then use them on the folder to get a full folder. 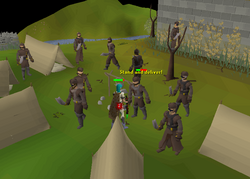 Fighting the outlaws in their camp.

Return to Rat with the folder; he will then ask you to deliver a letter to Surok Magis in the Varrock Palace library.

Head to the library, on the north side of the ground floor[UK]1st floor[US] of the castle, and speak to Surok Magis. He will destroy the letter and tell you that he can turn plain clay into gold bars! He will need two items, an ordinary bowl and an infused wand. He gives you Sin'keth's diary and a wand to be infused with chaos.

Note: If you want to get kudos from the Varrock museum you'll need to get the book Dagon'hai History. You'll find it in one of the two bookcases furthest east. After the quest you can give the book to the Historian Minas on the 1st floor[UK]2nd floor[US] of the Varrock museum.

Head to the Chaos Altar, with 15 chaos runes in your inventory. Entering the altar requires either a chaos talisman or tiara, or access to the Abyss. There are four ways to reach the altar.

Following this option avoids the Wilderness entirely. Read the Sin'keth's diary, and then go east of Varrock. Go south-west of the Lumberyard and west of the Earth Altar. You should find a statue of Saradomin. Talk to Anna Jones, and she will give you a bronze pickaxe. You must use a bronze pickaxe to excavate the statue to reveal the Tunnel of Chaos entrance. Enter the tunnel, and you will find that the Dagon'hai organisation lives there. Head north until you reach a portal. The portal leads to the second level of the Chaos Maze. Climb down a ladder to reach the Chaos Altar.

Use the Abyss to travel to the Chaos Altar, which requires completion of the Enter the Abyss miniquest. Teleport via the Mage of Zamorak north of Edgeville to reach the Abyss. Your prayer will be drained and you will be skulled. Make your way past Abyssal walkers (level 81) into the inner circle, from where you can teleport to the altar.

This option avoids the wilderness. Travel to the Chaos Altar by entering the Guardian of Chaos at the Temple of the Eye, which requires completion of the Temple of the Eye quest. To do this, join a game of Guardians of the Rift and wait for the Guardian of Chaos to be active, or use a Portal Talisman (Chaos) to access the Chaos Altar when the Guardian is inactive. This will teleport you close to the altar. To leave, go back through the portal and pass through the barrier at the entrance to Guardians of the Rift.

When you have reached the Chaos Altar, you must use your wand on the altar. This will absorb the 15 chaos runes to turn the wand into the Infused wand. Return to the library of Varrock, and talk to Surok Magis with the infused wand and an empty bowl. He will then give you Surok's letter for Rat Burgiss.

Note: If you take Surok's letter to show King Roald before Rat Burgiss, you will learn about his guards' skills.

Head back to Rat Burgiss, and deliver the letter. Rat Burgiss will explain to you that he is actually the commander of Varrock Palace Secret Guard and that Surok Magis is planning on taking over the Kingdom of Misthalin by using a mind-control spell on King Roald, and that you accidentally helped him with that. Rat Burgiss will direct you to Zaff, owner of the staff shop in Varrock, in order to prepare a spell to counteract Surok's.

Talk to Zaff, who will explain his plan to you. Zaff will give you a beacon ring and instructions on how to arrest Surok Magis. You do not need to equip the ring.

Get your gear ready for a fight. Head to Surok Magis (who is now wearing Dagon'hai robes), and talk to him. He will cast his mind-control spell on King Roald (level 47), who you will have to fight. When the King has low health, your character will say that "Now would be a good time to summon Zaff!". Now you can operate the Beacon ring to summon Zaff.

Zaff will arrive and saves King Roald by teleporting him away. Then he casts a spell on Surok Magis that permanently seals him in the library. Zaff then casts another spell and the library goes dark. When the light comes back, evidence of the battle is cleaned up and Zaff is gone. After this occurs, you will be able to purchase battlestaves from Zaff's Superior Staffs, in addition to the discounted battlestaves from the Varrock Diary.

Return to Rat Burgiss to finish the quest.

Note: If you are a 1 defence pure, it is advised not to speak to Rat, as Defence experience will be gained. Regardless, a confirmation message is given right before completion of the quest. 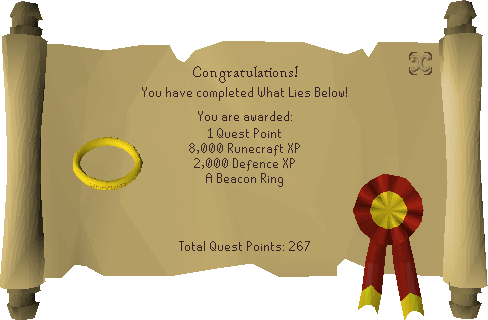