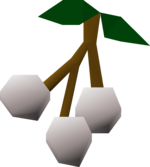 White berries are used in Herblore to make super defence potions, and regular defence potions. They are also used in The Hand in the Sand quest, as well as Mourning's End Part II, where it's part of a list containing 50 different items in order to get a Death talisman, and in Fairytale I - Growing Pains , where they are a possible requirement for Magic Secateurs.

Filling a compost bin with 15 white berries will yield 15 buckets of supercompost. However, this is not recommended as watermelons are far cheaper and have the same effect.

While planting the seed requires level 59 Farming, picking the berries does not. Picking one white berry yields 29 experience. Once all berries are picked from the bush, it will produce more berries, approximately 1 per 25 minutes; one seed can produce a minimum of 4 berries, where the Farming level reduces the chance of using up one of the four "lives" of the patch, much like harvesting herb patches.

According to the book Gielinor's flora - bushes, white berries are native to the forests of Isafdar and prefer to act as a parasite on trees. In addition, they have a cultural significance around Wintumber where they are used as a decoration under which lovers are expected to kiss.

White berries on lava dragon isle can be telegrabbed by lower level accounts if required.

You can grow white berries in the following locations: