A player with white armour equipped. 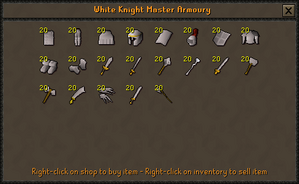 A White 2h sword must be bought from Sir Vyvin in order to complete the Elite Falador Diary. Talking to Sir Vyvin while wearing a White platebody and White platelegs is a potential cryptic clue for master clues.

The armour can be stored in the armour case of a player-owned house costume room. 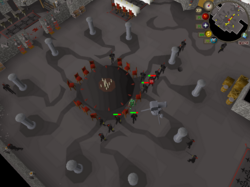 An optimal location for killing black knights is in the southern portion of Taverley Dungeon.

A good location to kill black knights is in the southern portion of Taverley Dungeon. The area is single-way combat, however, cannons may attack multiple NPCs, provided the owner is not being attacked, making safespots useful for higher damage output.

Players should bring the most accurate gear they have, and a cannon. Place the cannon just north of the table in the middle of the room. Hide between the chairs on the eastern side of the table, where most of the black knights will not be able to reach, and will quickly die from the cannon.

Another option is the black knights located north of Venenatis in level 32 wilderness. With the wilderness slayer update, additional spawns were created. The area is multi-combat allowing for cannoning without the use of a safe spot. The black knights will also be aggressive regardless of player level due to their location in the wilderness.

If a player doesn't have access to or resources for use of a cannon, another option is the Black Knights' Fortress where two black knights spawn right next to an altar to recharge prayer.

Players can check their black knight kill count by opening the Wanted! page on the quest list in-game.

Killing the Black Knight imprisoned in the Port Sarim Jail will not contribute to a player's White Knight rank.

In order to increase your ranking and unlock equipment items, you must kill a certain number of Black Knights. The kills start being tracked after being deputised as a White Knight during the Wanted! quest, and 100 kills are received as a bonus for completing the quest.[1] Killing White Knights decreases the player's ranking by 1 per knight killed.

White weapons require an Attack level of 10 to wield, with the exception of the white warhammer, which instead requires 10 Strength.