The white rabbit is a rabbit that players can capture with the Hunter skill at level 27 or above, granting 144 Hunter experience. Completion of the Eagles' Peak quest is also required. 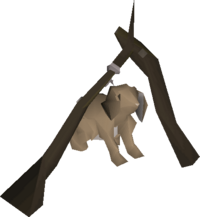 A rabbit caught in a rabbit snare.

The hunting technique is unique for this creature. First off, it requires a ferret, which can be caught in the same area by using a box trap. Additionally, a couple of rabbit snares are needed.

Upon flushing a rabbit hole, with a ferret in the inventory, a rabbit will leave a random hole and flight into one of the other holes. In order to catch the rabbit, the player has to set up rabbit snares along the paths between the holes, so that the rabbit will run into the snare and get caught.

Rabbit snaring can be done with multiple traps at once, with the maximum amount of traps depending on the player's Hunter level.