The Wilderness Slayer Cave is a cave located beneath the Wilderness. It contains a small variety of monsters that are commonly assigned by Krystilia. Most of these monsters are stronger than their other Wilderness counterparts, so their drop tables are slightly improved. In addition they drop a variety of items from Justine's shop, such as Trouver parchments and Blighted items. While on a slayer task they also have a 15% increased drop rate of Larran's key.[1]

The entire dungeon is multi-way combat. A dwarf multicannon can be placed in the dungeon.

Abyssal demons, Nechryaels, Dust devils, and Jellies can only be killed while on slayer task.[2] 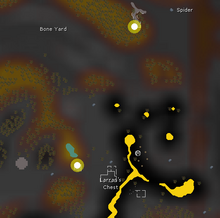 The location of the cave's entrances.

There are two entrances to the Wilderness Slayer Cave:

Monsters that can be found in the Wilderness Slayer Cave include: