From Old School RuneScape Wiki
Jump to navigation Jump to search
The RuneScape Wiki also has an article on: rsw:Wilderness North Volcano

The Wilderness Volcano (members only area) is a small volcanic outcrop in the north-eastern section of the Wilderness.

Nothing is known about it, as it is not involved in any quests, and currently no NPCs mention anything about it. However, its name is mentioned on a hard clue scroll. While walking around it, the ground will shake periodically - probably because of heavy volcanic activity. There is a rope bridge that spans the central pool of lava that can be crossed.

The north-western side of the volcano has a wrecked ship apparently made of metal with what seems to be a strange cannon on top; however, it has no use other than for scenery. A large amount of skeletons litter the area, especially around the ship, seeming to indicate that the crew were either thrown from the ship during the crash and subsequently died from their injuries, or else that the crew attempted to flee and were then killed by lava. One of the examine texts for these skeletons reads "A victim of war...looks like he's been dead for a while now.", implying this ship and its crew, if not the volcano itself, may have taken part in a notable event from Gielinor's past, such as the God Wars, or in potential far away lands. Next to the ship is an extension of the land on which eight squares are level 56 Wilderness - the deepest anyone can go. 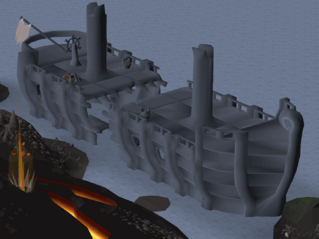 The mysterious wrecked ship in the northern part of the volcano.

Like near the Chaos Temple, balls of fire shoot out of the pools of lava. If one hits a player, it can inflict minor damage. The volcano can be used to flee from the powerful Chaos Elemental that resides nearby to the west of the Rogues' Castle. Apart from this, the volcano has virtually no use except for forging Odium and Malediction wards, and being a sinister piece of scenery well suited to the hostile landscape of the Wilderness.

The centre of the volcano houses a powerful forge, where players must travel to in order to combine the three shards of either the Malediction ward or Odium ward. When using one of the three shards on the Volcanic Forge, a message appears in the game tab stating You forge the shield pieces together in the chambers of fire and are blown back by the intense heat.

A goblin appears as the player uses a gold ring on the Volcanic Forge.
Retrieved from ‘https://oldschool.runescape.wiki/w/Wilderness_Volcano?oldid=14272383’
Categories:
Hidden category: