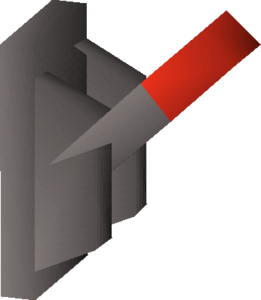 The Ardougne teleport lever is located in the west section of East Ardougne, just north of the gate separating the two cities. Along with the Edgeville teleport lever, this is the lever that transports players to the deep Wilderness in the Deserted Keep when pulled. 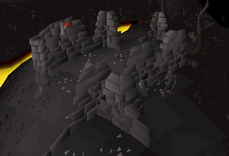 The lever's destination, in Deep Wilderness.

This lever is located in a building on the west side of East Ardougne. It will teleport players deep within the Wilderness, on an isle near the Mage Arena (known as the Deserted Keep) in which a knife or a slashing weapon can be used to cut through some spider webs. From there, players can walk due west, until they see some more webs that lead to a second lever. The lever there will take players to the bank area of the Mage Arena.

Also, to the east of the Deserted Keep is the Resource Area. Even further east is the Wilderness Volcano, Rogues' Castle (patrolled by the Chaos Elemental), and the Fountain of Rune.