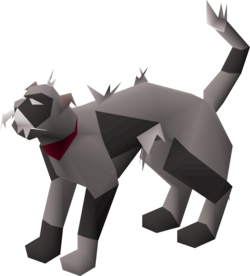 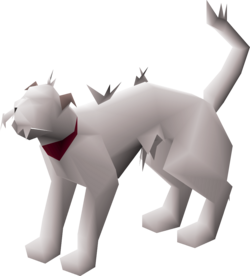 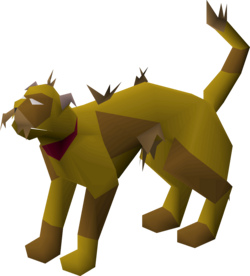 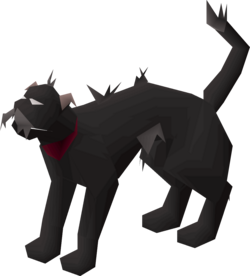 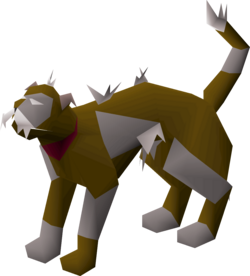 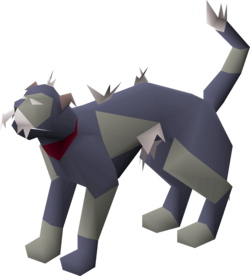 A wily cat is a special variant of a pet cat, which players gain access to by completing the Ratcatchers quest. After completion, players can speak to Felkrash to have her train their overgrown cat into a wily cat. (Warning: After training your overgrown cat to be a wily cat, you will start from zero for the number of rats caught for the cat training medal. Wily cats are also ineligible for the medal.) Wily cats are the best hunters of any cat, with a success rate of 70%. When fighting Hell-Rat Behemoths they have higher health, get hit less often, and can hit slightly higher than regular cats. In addition, they can also catch Kalphite Larvae and butterflies (as well as Hunter butterflies, though this yields no experience). Wily cats do not require food of any kind (Unless when fighting Hell-Rat Behemoths).

Players are only allowed to have one wily or lazy cat at a time, in addition to one kitten or adult cat, and as many overgrown cats as they wish. You may have multiple wily cats if you first store your existing wily cat in your menagerie before training another.

When fighting Hell-Rat Behemoths, the King rat or in the Rat Pits, wily cats have the following combat stats:[1]

After completion of Ratcatchers quest, an overgrown cat can be trained into a wily cat by talking to Felkrash in the Port Sarim Rat Pits. After a random amount of time, usually under an hour, regardless of the amount of interactions performed, a wily cat will become a lazy cat. It can then be re-trained into a wily cat by repeatedly catching rats (both normal and hell-rat versions). If, whilst attempting to train your lazy normal/hellcat into a wily cat, the cat does not seem to transform (it should take about 25 rats), players can pick up their cat and re-drop it to reset the 'training timer', otherwise you could be training your cat for what seems an indefinite time (even hundreds of rats and 1.5hrs+ have been observed without success).

It might also be possible to re-train a lazy cat into a wily cat using a ball of wool to play with your cat or by stroking it, however this has not been confirmed. Having your cat chase a mouse toy to transform it back into a wily cat does not work in all likelihood.[2]

Players are only allowed to have one Wily or Lazy cat out or in bank at a time, in addition to one kitten or adult cat, and as many overgrown cats as they wish. You can however have multiple lazy/wily cats by storing them in your menagerie before training another.

While wily cats do not need attention like kittens do, the amount of attention they have received influences the dialogue when the wily cat is spoken to.

There is no mechanical benefit to a fully content wily cat.

Wily and lazy cats can be named by speaking with Felkrash. The name can be a combination of any six letters or spaces, but no numbers. Note that the name will be used in the RuneScape interface for every cat the player has, even kittens, adult cats, and overgrown cats.

Players can store both lazy and wily cats in their menageries. Wily cats will not become lazy while in a menagerie.