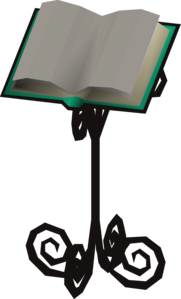 The Winter's End is a book mounted on a lectern, found in the southern part of the Library Historical Archive. It cannot be removed from the lectern it is on.

The book is an account of the events that led to the imprisonment of the Wintertodt, known then as the Winter Beast, behind the Doors of Dinh.

The following text is transcluded from Transcript:Winter's End.

A master smith has come forth, with plans to defeat Winter Beast! May we finally defeat the Beast after five decades of terror?

The Order is to meet with Dinh the Smith to assess the feasibility of these plans.

Dinh, of Lovakengj, believes a magical tree found within the frozen tundra to the north has the power to defeat the Beast.

Dinh's plans are complex but I believe them to be worthy. We must construct a prison to contain the Winter Beast before luring it to the prison and sealing it behind Dinh's great doors.

Dinh claims the Bruma tree, found at the heart of the frozen tundra, can burn for eternity. The heat from the Bruma tree will be enough to contain the Beast so that we may seal it within this prison.

Dinh has constructed the doors to the prison from various metal compounds including Lovakite but they must be reinforced with Bruma bark and enchanted by the Order.

Lord Lovakengj has approved the plans.

Two hundred days have passed and little progress has been made. The Winter Beast still roams free but we have located the Bruma tree and selected the site for the prison.

So far three members of our Order and two scouts have perished in the line of duty.

Six hundred days later, the prison is complete. We've lost thirteen members of the Order in recent weeks; the Winter Beast must know of our plans.

The time has come to end this terror. At first light, this saga enters the final chapter as we begin luring the Beast to the prison.

Rejoice! Our mission has succeeded, the Beast has been contained!

The Bruma tree burns bright in the night sky, warming the northern tundra and holding back the Beast.

Lord Lovakengj has officially declared that today is the day of Winter's End.