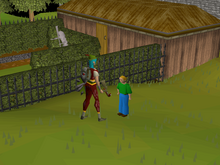 Talking to the boy.

Go to Taverley and talk to the boy near the eastern entrance to Taverley along the hedges. He says that he kicked his ball over the hedge into the garden and the witch living in the house put it in her shed. The boy wants you to get it back for him. Tell him you'll see what you can do. 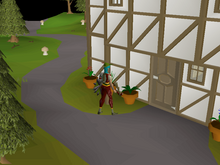 The location of the key.

Go west then north around the hedge to the front door of the house - it is locked. Look-under the pot north of the door to find a door key and enter the house. Read the entire diary on the table.

Getting to the garden[edit | edit source]

Go down the ladder in the northern room to enter the basement. If you don't already have leather gloves, search the boxes for a pair, however it may take many attempts to find them. Equip your gloves, go through the gate, and search the cupboard for the magnet (be sure to finish the dialogue). Go back up the ladder and into the southern room with the door that leads to garden. Note: Be quick, the mouse will go away after some time, you will lose your cheese and have to get another one.. Drop your cheese, suddenly a mouse will come out; use the magnet on the mouse and it will unlock the door. Enter the door into the garden.

Getting past the witch[edit | edit source]

Go to the shed and use the key on the door. Do not attempt to take the ball otherwise the Witch's experiment will lower your stats. Attack the Witch's experiment. Each time you kill the experiment's current form it changes to a stronger form. You have to kill the experiment four times before it is defeated - the first stage is a Skavid (level 19), then a spider (level 30), then a bear (level 42), and finally a wolf (level 53). If you flee during the battle you will have to start over. 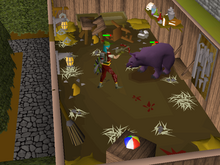 For anyone who only wants to use ring of recoil: They have 21, 31, 41, and 51 hitpoints respectively for a total of 144. Four rings of recoil are required, more are recommended, as they break after reflecting 40 damage. Each forms max hit increases by 1, the Skavid has a max hit of 2, the wolf has a max hit of 5. Bring lots of food depending on your hitpoints level and purple sweets. If you don't want to tank as much, bring a bone dagger (p++) or super poisoned iron knives and attack until they are poisoned then hide behind the table with the ball on it.

Note that you cannot use a Dwarf multicannon here.

The first and second forms can be safespotted with Magic or flinched with Melee by going into the north-east corner, waiting for the experiment to move south of you, run past it towards the south, then walk on top of it. After this, walk west 1 tile so you are position diagonally from the Witch's experiement, then you're free to attack.

The third and fourth can also be safespotted by walking to the south of the shed between the sacks and the crate with the ball on it all the way to the wall and using Ranged or Magic attacks to kill the last two forms.

Once you have killed the Witch's experiment, take the ball and leave. Do not let the witch see you or she will teleport you outside and you will lose the ball. You may teleport out of the area to avoid going past the witch again while still retaining the ball. Return to the boy and give him the ball. 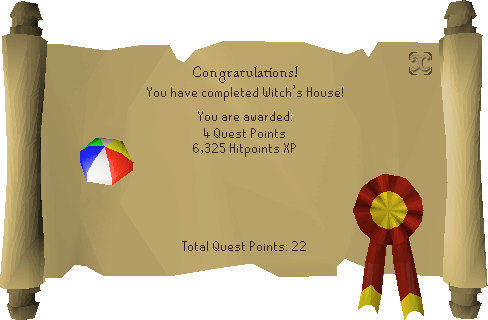 Completion of Witch's House is required for the following: