Talk to Hetty in her house in south-east Rimmington, and tell her you want to know more about the black arts. She will tell you she is making a potion and needs four ingredients that she wants you to get: a rat's tail, a piece of burnt meat, an eye of newt, and an onion.

Kill a giant rat just north of the chapel graveyard south-east of Rimmington, or kill a cow in the cow pen just south of Falador, and cook the meat. There are ranges where you can use to cook the meat, in the house just south of the jewellery shop in Port Sarim and in the house north of Hetty's; you can also light a fire yourself to cook the meat on (logs spawn in the general store of Rimmington). Alternatively, meat can be used on the fireplace in Hetty's own house. If you didn't manage to burn the meat, use the cooked meat on the fire or range to purposely burn it. You can also buy raw meat from Wydin at the food store in Port Sarim. 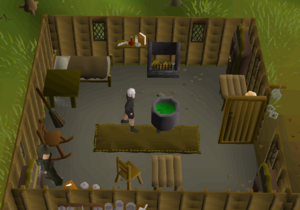 You can buy an eye of newt from the magic shop in Port Sarim for 3 coins. The magic shop is labelled with a fire rune symbol on the map.

Onions can be found in a field directly north of Rimmington and east of Melzar's Maze, or in the backyard of Fred the Farmer's farmhouse west of the sheep pen in Lumbridge.

When you have all these items, talk to Hetty. She'll put them in her cauldron and tell you to drink from it. Drink from the cauldron to complete the quest and gain your reward. 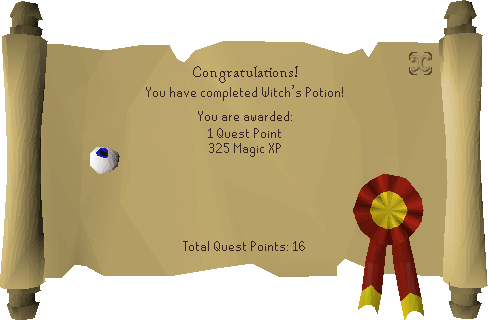