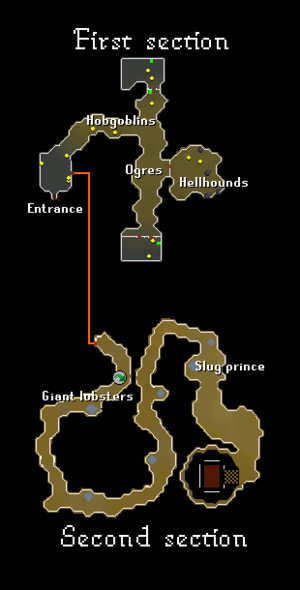 The Witchaven Dungeon is a dangerous dungeon in Witchaven that players with low-medium combat levels should not enter without a very good amount of food. The quickest way to get to Witchaven dungeon would be using Ardougne Teleport or the tablet then head east. The other option is to use the fairy ring code blr and head south.

When you enter the dungeon, you will come into a room containing aggressive level 28 hobgoblins. To the north lies a section which leads into 3 rooms. The north and south rooms contain level 53 ogres. The east room contains a few hellhounds, which you are able to cannon. This section of the dungeon is a key part in the Family Crest quest for obtaining 'perfect' gold ore.

To enter the section of the dungeon containing the hellhounds, you will first have to solve a lever puzzle. The following is a set of instructions on how to gain access to the room with the hellhounds.

(If you log out at any point before completing the puzzle, you will have to start over.)

Note: You only have to do the puzzle once to gain access to the hellhounds. If you leave and come back much later you can simply walk into the room via the door and it will not be locked.

The secret section is discovered during The Slug Menace. This part of the dungeon is filled with level 45 giant lobsters. Players fight a level 62 Slug Prince later in the quest near the end of the hall. There is also an Agility shortcut, which makes passage through the dungeon much quicker. Finally, at the very end of the dungeon is Mother Mallum's lair. The Slug Queen's lair vaguely resembles a bed and is probably where she stayed throughout her years of imprisonment.

The following quests are involved with the dungeon: