The Wizards' Guild has a number of useful things for those interested in Magic. It is located in Yanille, and requires level 66 Magic to enter. Boosts, such as a Wizard's mind bomb at level 63, can be used to enter. Entering the Wizard's Guild is a requirement for the Hard Ardougne Diary.

Players can reach the guild by going to Yanille. Besides walking, there are several fast-transport means to the area near Yanille: 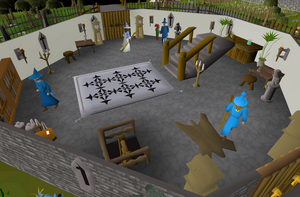 The ground floor of the guild.

Wizard Sinina sells a variety of mystic equipment. He also sells the Magic cape for 99,000 coins to players with level 99 Magic.

The player needs to complete The Hand in the Sand to open the store.

The magic portals are one-way teleportation devices. There are no portals at the destinations to return players to the Wizards' Guild.