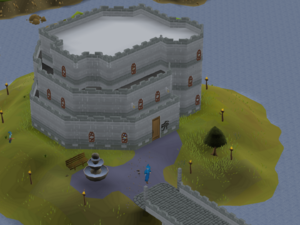 The Wizards' Tower is located south of Draynor Village, over a bridge. The tower plays a part in many quests.

The Wizards' Tower was originally created early in the Fifth Age to research and develop the new arts of Magic and Runecraft. The wizards within the Tower also created the Mage Training Arena for mages to train the more mundane spells. During a meeting of wizards at the tower, the Zamorakian mages, believing their Saradominist counterparts would selfishly hoard the magical knowledge, set the Tower alight. Most of the mages within the Tower were killed, while most magical knowledge and the art of Runecraft were lost to the flames. Though the Tower has been rebuilt, it is still in the process of rediscovering the lost knowledge.

Inside the tower[edit | edit source]

Inside the tower is a multiple number of floors, and a few notable non-player characters. The whole tower, except for the basement, is a multi-combat zone.

The basement is one of two entrances to the rune essence available to free-players, and one of four for members. The basement also plays a role in The Restless Ghost quest. It can be accessed via a ladder on the ground floor of the Wizards' Tower.

The basement is where players can find Head Wizard Sedridor. He plays a major role in the Rune Mysteries quest. He can also teleport players to the Rune essence mine after completing this quest.

There is an altar, but it cannot be used to recharge Prayer points. It is used during the Restless Ghost quest.

On the ground floor, there are two rooms with many wizards. They are level 9 and quite popular for free-to-play players as not many monsters drop runes and these are the only ones that drop wizard robes (one of the only free-to-play magic armours). There is also a leather boot spawn on the table in the library. At the staircases, there are three log spawns. There are also bookcases in the library, and players may find the following books while searching them:

Here resides the loony Traiborn, and a wizard who can make Splitbark armour on members' servers, with the proper supplies. There is one or two level 9 wizards, and also a couple of useless rooms. Traiborn helps you out when making the Cake of guidance for the Lumbridge Guide in the quest, Recipe for Disaster.

On the second floor in the tower, there is a caged level 82 lesser demon free for players to battle with. Because it is caged, it cannot attack any players or do damage to them, but only long-ranged attacks or magic can harm it. If you wish to obtain the drops from the lesser demon, you must use Telekinetic Grab (33 Magic required). Also, there is Wizard Grayzag, who used to be an attackable level 41 NPC, who summoned imps to fight against players who attacked him. He plays a role in the Imp Catcher quest.

The following quests can be started in the Wizards' Tower, both of which are free-to-play: