The Woodcutting Guild is a members-only guild located in the south-western corner of Hosidius. In order to enter the guild, players must have at least level 60 in Woodcutting (which can be boosted), as well as 75% Hosidius favour.

While inside the guild, players will receive an invisible +7 level boost to their Woodcutting. This boost will stack with any existing boosts the player already has,[1] such as the visible +3 boost from using the dragon axe's special attack, though visible boosts are capped to level 99.[2] However, the invisible boost will not allow a player to perform actions above their base level.

Entering the Woodcutting Guild is a task in the hard Kourend & Kebos Diary. 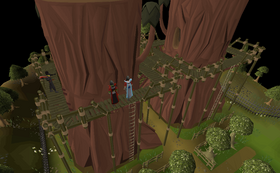 A group of players chopping redwood. The entrance to the upper level can be seen on the right tree.

Within the guild players can find the following types of trees:

A map of the Woodcutting Guild dungeon. 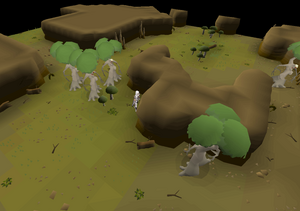 The ent habitat found underneath the Woodcutting Guild.

The Woodcutting Guild dungeon found below the guild can be accessed through the cave entrance near the sawmill. There are 22 Ents (combat level 86) that reside within the dungeon. It is the only place outside the Wilderness where players can kill and woodcut the Ent remains. Unlike the wilderness ents, the ents in the woodcutting guild dungeon will only reward one noted log instead of two for every successful chop. Players have a chance to obtain bird nests from ents in the ent dungeon as well. There is also a bank in the south-west section of the dungeon. The dungeon requires woodcutting level 60 to enter, so if you entered the guild using a boost and want to enter the dungeon, the player must either hurry, boost again, or level up.

There is a sawmill available for use, which is much closer to the bank compared to the main sawmill in the Lumber Yard north-east of Varrock.

Perry's Chop-chop Shop can be found by the entrance inside the guild. This is the only shop in Old School RuneScape that sells rune axes.

Within the shop, there is a bank deposit box that is not shown on the minimap, which is convenient for the 3 yew trees directly north of the shop and the 1 yew tree and several maple trees west of the shop.

A player offers bird's eggs to the shrine.

The shrine is a large bird's nest located outside the entrance to the Ent dungeon. It is marked by the

on the minimap. Players can offer bird eggs to this shrine to receive 100 Prayer experience and a bird nest containing tree or fruit tree seeds. There is also a 1/300 chance of receiving a piece of the evil chicken outfit for each egg offered.

The music played in the woodcutting guild has changed several times throughout its history. In 2016 Country Jig, the main theme of house Hosidius, was played, but after complaints that it didn't really suit the guild, this theme was changed to The Forlorn Homestead.