The World 666 event was an event that commemorated the 10th anniversary of the Falador Massacre that occurred on 6 June 2006, hence the name. While in Falador on the normal servers, they may randomly see the face of Durial321 appear in their screen, and receive a green partyhat shortly afterwards. 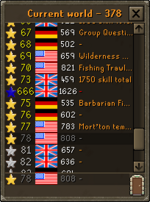 World 666 as seen on the world switching interface.

Players could access the main event by choosing World 666 before logging in (or selecting it in the World switching interface), where players would then be transported into an unrestricted world, where the player's stats and progress are separate from the main server.

Players could teleport to Falador via a portal south-east of the bank. Here, players could engage in PvP combat, or fight Durial321, the name of the player that gained notoriety during the massacre. The player who did the most damage to him would gain a green partyhat as a drop.

A unique soundtrack, Massacre, could only be listened to while in Falador on World 666. The track bears a resemblance to the song Planet Hell by Nightwish, as the song is often associated with the original Falador Massacre. 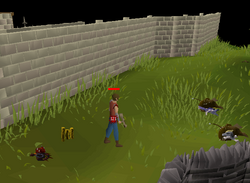 A player is instantly killed as they attempt to escape from Falador.

Players may attempt escape Falador via searching a bronze crossbow and mith grapple from a max cape, and using the grapple shortcut north of the Falador Party Room. However, this will result in instant death and the chatbox message stating Please return to Clan Wars.