The Wushanko Isles (also known as the Eastern Lands or Eastern Realms) are an archipelago in the far east of Gielinor, across the sea from Morytania and the Kharidian Desert. They are currently inaccessible.

Very little is currently known of the Wushanko Isles, and the information that is known varies in nature. Only a handful of characters mention it. However, it seems that it is based on medieval Asia, particularly Japan.

According to the Mysterious Old Man, the people of the Eastern Lands are famed for their complex toys and puzzles. While exploring it, the Mysterious Old Man happened to find a strange box, which he kept with him. He soon discovered, though, that it magically multiplied constantly, so now he gives them away.

The ghosts of Port Phasmatys are known to trade with the Eastern Lands, although their trade has diminished greatly since their town was conquered by Necrovarus, who is said to have been born there. Ak-Haranu, a trader found in the port's docks, also claims to have come from the Eastern Lands. Ak-Haranu appears to wield a katana.

The Old crone, in her house between the Slayer tower and Fenkenstrain's Castle, says: "I cannot read the strange letters of the Eastern Lands." It seems that, like real-world Asia, cultures in the Eastern Lands have different writing systems than the west.

The cyclopes on the top floor of the Warriors' Guild are "from the far east lands", implying the guildmaster Harrallak, or possibly Kamfreena, brought the monsters with them from the East. Shanomi, a battle mage who created the magical animators and is in charge of the animated armour in the guild, also comes from the Eastern Lands, as does Kamfreena, based on her Zen dialogue and her apprentice Lorelai's use of a katana.

The Nightmare and Shura also hail from the Eastern Lands, from the island of Ashihama. Ashihama is located within a group of islands called the Pincers which helps make up the Wushanko Isles. 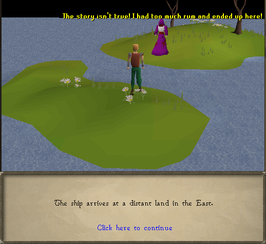 A player meets Zaros in the Eastern Lands.
Retrieved from ‘https://oldschool.runescape.wiki/w/Wushanko_Isles?oldid=14290195’
Categories: