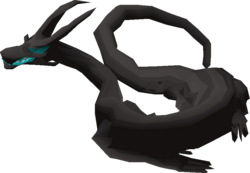 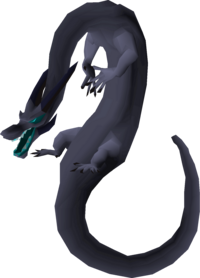 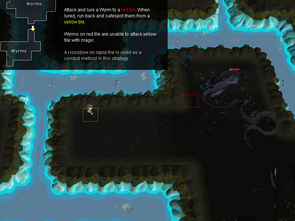 Wyrms are draconic creatures found in the lower level of the Karuulm Slayer Dungeon in Mount Karuulm, requiring level 62 Slayer to kill. Players can get there quickly by using the fairy ring cir located south of the mountain. As they are only found within the volcano, players must wear the boots of stone, boots of brimstone or granite boots to protect themselves from the extreme heat of the dungeon floor. Players that have completed the Elite Kourend & Kebos Diary do not need to wear this footwear to avoid being rapidly burned.

Killing a Wyrm is required for the Hard Kourend & Kebos Diary and the Easy Combat Achievements.

Wyrms were an ancient race of dragons, said to be capable of destroying cities and armies on their own. They slowly disappeared due to their heavy involvement in the God Wars. The current Wyrms in the dungeon are an attempted recreation of the powerful Wyrms of old by a Dragonkin named Karuulm.

Wyrms do NOT require any form of dragonfire protection. When encountered, they will be slithering on the ground. However, once attacked, they will levitate off the ground and attack the player. Wyrms attack with both Melee and Magic; however, if attacked from a distance, they will only use their magic attack. This makes the Ranged attack style while using a form of magic protection, such as Protect from Magic, or armour with high magic defence bonuses like dragonhide, a viable method for killing Wyrms.

They are the only monster to drop the dragon sword and dragon harpoon.

If on a Slayer Task, any idle Wyrms on the eastern alcove of the second island can be attacked and then lured to the corner to trap them, allowing players to range them at a specific spot while staying out of their magic attack range of 6 squares. Wyrms will return to their idle state after being unable to retaliate for several hits, and may walk out of the safespot area in the process. This can cause the player to run after the Wyrm and start taking damage. For this reason it is recommended to pay some attention even while using this method.

Drop rates estimated based on 847,282 kills from the Drop Rate Project, unless otherwise cited.

There is a 3/76 chance of rolling the rare seed drop table.

There is a 1/76 chance of rolling the gem drop table.