X Marks the Spot is an introductory quest of the Great Kourend quest series focusing on Veos' treasure hunt in Lumbridge.

It is mainly targeted at low levels and is designed to act as a small introduction to Great Kourend while providing more links between Kourend and the mainland. In this quest, the player must embark on a short treasure hunt for Veos. While not initially obvious, the events of this quest are important to the overall Kourend storyline.[1]

It is not a requirement of the quest to visit Great Kourend but it has slightly different dialogue if you've already been there.[2]

{"requirements":"None","desc":"Veos has long been a lover of treasure hunts and his latest hunt has brought him to Lumbridge. However, not knowing the area well, Veos could use some help finding this treasure.","difficulty":"Novice","kills":"None","name":"X Marks the Spot","start":"Speak to [[Veos]] in [[The Sheared Ram]] in [[Lumbridge]].","length":"Very Short","items":"* [[Spade]]"}

Map showing locations visited during the quest. Click on pins for description.

Speak to Veos in The Sheared Ram pub in Lumbridge. He has travelled to Lumbridge on a treasure hunt after finding a scroll in Great Kourend, a kingdom far west of the mainland. However, due to not being familiar with the area, he is stuck on what to do next. Offer to help him, and he will give you a treasure scroll.

Should players be stuck on any step of the treasure scroll, players can talk to Veos, either on the dock just south of Rusty Anchor Inn in Port Sarim or in The Sheared Ram in Lumbridge for hints. 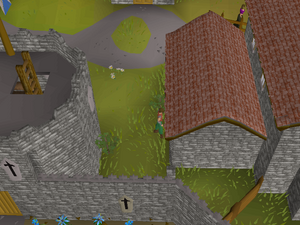 The spot to dig for the first clue.

The first clue on the treasure scroll will state: "Within the town of Lumbridge lives a man named Bob. He walks out of his door and takes 1 step east, 7 steps north, 5 steps west and 1 step south. Once he arrives, he digs a hole and buries his treasure."

From Bob's Brilliant Axes (indicated by the

icon), follow the directions in the treasure scroll and then dig with a spade. The correct spot is the tile north of the north-western window of the house connected to Bob's Brilliant Axes, directly west of the plant. You will receive the next treasure scroll step. 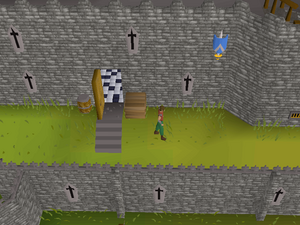 The spot to dig for the second clue.

The second clue on the treasure scroll is a map. This will lead to the door behind the Lumbridge Castle by the Cook's kitchen. Dig on the tile directly south-west of the large crate and you will receive a mysterious orb. 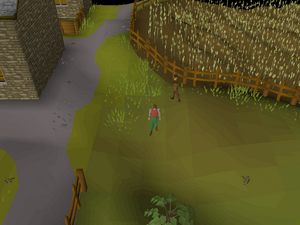 The spot to dig for the third clue.

The orb works in much the same way as the Hot Cold Treasure Trails or The Enchanted Key miniquest.

The location to dig is just east of Draynor Village, north-west of the jail and south of the wheat field, near Leela. Dig four steps to the north of the bush there. An amulet of glory will teleport the player close to the final location, requiring only a short walk north-east. If you are a lower level, watch out for the aggressive jail guards nearby. You will obtain another treasure scroll. 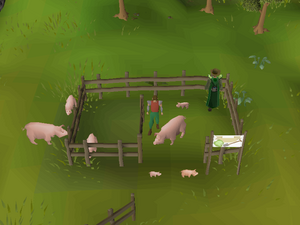 The spot to dig for the final clue.

The fourth clue is a Caesar shift that encrypts a location. In order to decode a Caesar-shifted message, you must first count the number of times a letter appears within the cipher. See here on how to solve a Caesar shift.

The cipher, ESBZOPS QJH QFO, when decoded, is DRAYNOR PIG PEN. Dig in the centre of the pig pen where Martin the Master Gardener is and you will receive an ancient casket. As you dig it up, you hear a faint whispering, though you can't make out what it says.

After obtaining the casket, go to the northernmost dock in Port Sarim, just outside Rusty Anchor Inn, and give Veos the treasure. When asked what was in it, he will shiftily state it was nothing important, just something that might be useful to him back in Great Kourend. 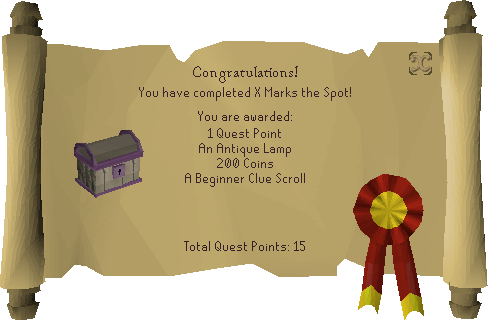 Completion of X Marks the Spot is required for the following: