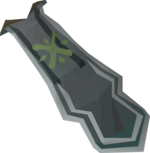 It can be mounted on a cape hanger in an Achievement Gallery of a player-owned house.