Xeric's talisman is an amulet that was once owned by Xeric, a tyrannical ruler who reigned over Great Kourend during the Age of Strife nearly 1,030 years ago. It is obtained as a rare drop from killing lizardmen, brutes and shamans. It can also be obtained by stealing from stone chests in the Lizardman Temple beneath Molch, albeit at a slightly rarer rate.

Upon obtaining the talisman, it is inert and uncharged. By charging the talisman with lizardman fangs (costing 19 coins per charge), the talisman becomes able to teleport players to various locations throughout Great Kourend. Each fang provides one charge for the talisman, holding a maximum of 1,000 charges. The charges can be removed whenever a player wishes to do so by selecting the Uncharge option on the charged talisman. This will revert the amulet back to a Xeric's talisman (inert).

It is possible to obtain multiple talismans. However, the charges are not shared between the amulets; thus, they do not stack in the bank. Extra talismans can be dismantled, providing 100 lizardman fangs, giving it a theoretical value of 1,900.

At level 72 Construction, the Xeric's talisman can be mounted in a player's Portal Nexus room within their player-owned house. This requires an inert Xeric's talisman, 1 mahogany plank, 1 gold leaf and 5,000 lizardman fangs. While mounted, the talisman provides unlimited teleport charges. 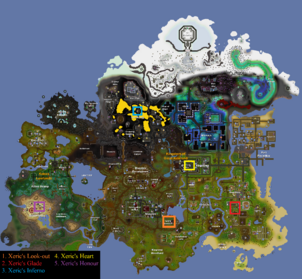 The talisman can teleport players throughout various locations in Great Kourend, including the following locations:

With the exception of stone chests, the drop rate of the talisman is increased to 1/125 after completing the easy Kourend & Kebos Diary.