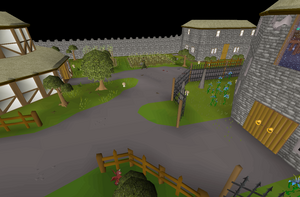 Yanille (pronounced "ya-NEEL") is a members-only city that lies to the south of Ardougne. It is beset by ogres from the south and west, so Yanille is heavily defended by guards.

There is a bank in eastern Yanille.

The Wizards' Guild requires 66 Magic to enter. Players who enter the guild can buy runes and mystic robes, mine rune essence, and range or mage captured zombies. The guild also contains three portals to other magical places around Gielinor.

The Wizards' Guild gives access to the closest rune essence mine to a bank in Old School RuneScape.

The bartender at the Dragon Inn sells beer, Dragon bitter, and Greenman's ale. It is one of the locations players must visit to complete the Alfred Grimhand's Barcrawl miniquest.

Bert and the sandpit[edit | edit source]

Bert is the starting point for the Hand in the Sand quest. Once this is completed, players can ask Bert for 84 sand to be delivered to their bank every day. Players can use the Lunar spell NPC Contact to ask Bert for their sand without visiting Yanille, and he will automatically deliver it to players who have completed the elite Ardougne Diary.

There is also a sandpit to the west of Bert's hut, where you can collect sand in buckets for use in the Crafting skill.

He also has a range and a sink in his hut.

Just west of Bert's house is a POH portal. Players with 50 Construction can pay any estate agent 25,000 coins to move their house here.

Players often move their house here because of the closeness to the bank and not having to use their servant to go to the bank for them.

The mine is located north-east of the city. It is one of the closest mines to a bank, and provides excellent experience for miners wishing to get levels quickly. The following ores can be found at the mine:

The Yanille dungeon can be very useful to high level players training Herblore, but high levels of Agility are required to penetrate deep into the dungeon.

The watchtower is located just outside the northwest wall of Yanille. It is the start of the Watchtower quest, and the place you teleport into when you use the Watchtower Teleport spell. Players can find watchmen on the 1st floor[UK]2nd floor[US] who require 65 Thieving to pickpocket. They yield 60 coins or bread, and 137.5 experience per pickpocket.

There is an Agility shortcut under the north wall of Yanille, somewhat near the Watchtower, that requires 16 Agility to use.

The anvils in Yanille are the second closest to the bank in the game, the closest being Varrock west bank. Many high level smiths choose to smith here because it's quieter.

The cooking shop in Yanille sells several items, including:

There is also a churn for making butter, cream, or cheese with, a sink for water, and a range for cooking.

The hops patch is used in the Farming skill. It is watched over by Selena.

The archipelago to the east of Yanille is home to many jungle spiders. Hazelmere, the gnome mage whom players must visit during The Grand Tree and The Eyes of Glouphrie quests and a regular customer of the Gnome Restaurant, may be found up a ladder here. There is also a fairy ring c•l•s.