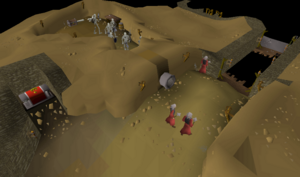 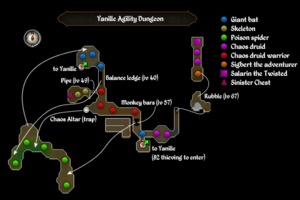 The Yanille Agility Dungeon (also known as Yanille Dungeon) is the dungeon under the town of Yanille. Part of the dungeon can be entered by players with any Agility level, while other parts have minimum Agility requirements.

The experience rewards for using this dungeon are not as good as most other Agility courses, so players rarely come here to train Agility. Instead, players use it to training combat skills using the monsters there and gather their drops. Players training Herblore also use the dungeon, since many monsters here sometimes drop high-level herbs. Torstol, a fairly rare herb, can be obtained here.

Players must go to the Yanille area to reach the dungeon. Other than walking, there are a few ways to get there:

The dungeon has two entrances:

The dungeon has an upper level and a lower level. The upper level contains most of the monsters and items of interest to the players. The lower level can only be entered by praying at the altar, or failing either the balance ledge or the monkey bars. To leave the lower level, players can take the one-way staircase at the north end of the chamber. Failing the pipe obstacle will cause the player to take damage, and become stuck for a short time.

The basement of the Wizards' Guild is adjacent to the dungeon, but not connected underground.

The Sinister chest can only be opened with the sinister key, which is occasionally dropped by Salarin the Twisted deeper in the dungeon, by Magpie implings, or from the Chaos Fanatic in the Wilderness. The chest can release poison gas when opened, so having an antipoison potion is recommended. The chest always yields 9 noted herbs: 2 Harralander, 3 Ranarr weed, 1 Irit leaf, 1 Avantoe, 1 Kwuarm, and 1 Torstol. 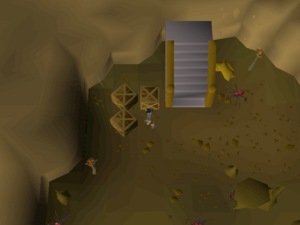 A player searching the crates for a hard clue.

Falling into the place with the poison spiders, either by repeatedly walking across the balancing ledge (level 40 Agility required) or praying at the altar of Zamorak, and searching the crate by the stairs leading up is the solution to the hard cryptic clue: When you get tired of fighting, go deep, deep down until you need an antidote.