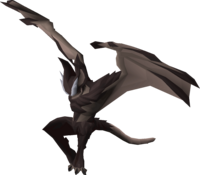 The Yarasa were a species of bat-like creatures native to Vampyrium. They were powerful predators competing with the vampyres for food. When the god Zaros arrived on Vampyrium, he taught the vampyres of society and culture. The establishment, understanding and unity of a society gave the vampyres an advantage over the Yarasa, who were hunted to near-extinction by the vampyres. The only survivor of the race was Xarpus, also known as the Yarasa King, who was the most powerful and dangerous of his kind. Xarpus roamed the forests for millenia until he was caught by Lowerniel Drakan, who had returned to Vampyrium. Drakan captured Xarpus and brought him to Gielinor, where he handed him over to Verzik Vitur to be used as a beast in the Theatre of Blood.