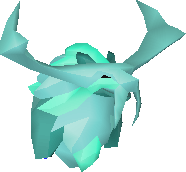 The Youngllef is a pet received from the reward chest in The Gauntlet. It is a smaller version of the Crystalline Hunllef. Upon completion of the Corrupted Gauntlet, players unlock the right click "Metamorphosis" option to change between the regular Youngllef and the corrupted variant. The pet will always be received in the regular form, even if it is obtained from the Corrupted Gauntlet.

The following text is transcluded from Transcript:Youngllef.
Standard dialogue

A random dialogue will be selected every time the Youngllef is spoken to:

This dialogue is only triggered when the Youngllef is roaming in the player-owned house and interacts with a scratching post built in the Menagerie.

This dialogue is only triggered when the Youngllef is battling another pet in the arena in the Menagerie.