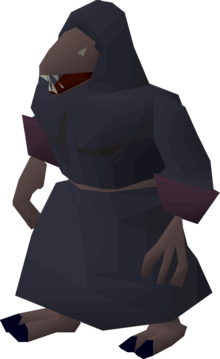 Yt-HurKot is a TzHaar monster that appears in both the TzHaar Fight Caves and the Inferno.

In both cases, they appear when their respective Jads (TzTok-Jad in the Fight Cave and JalTok-Jad in the Inferno) reach half health. For TzTok-Jad, four Yt-HurKot will appear for it. For JalTok-Jad, five will appear for the lone Jad in wave 67 and three each for the three Jads in wave 68. In the fight caves the healers heal a flat 5 hp every 4 ticks (per NPC)[1], while Jads healers in the inferno heal 15-24 hp every 4 ticks (per NPC)[2].

In the fight caves, they will heal Jad if they are within 4 squares of Jad, but will stop healing if interrupted. If you interrupt them before they have a chance to heal Jad, they will re-aggro Jad if dragged to within 5 tiles of Jad's south west tile. The Inferno versions must be within melee distance to heal Jad.

Furthermore in the fight caves, the healers can be killed, but will respawn if they are not killed before Jad reaches full health from healing.