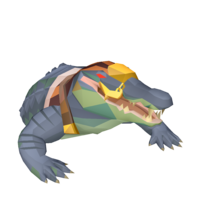 Zebak is a boss encountered in the Tombs of Amascut appearing as a warped crocodile-like monster based on the goddess Crondis. Zebak was part of a large group of crocodiles living in the Elid. With so little food available, the group had to rely on their resourcefulness. However, Zebak was weak, and was unable to compete with the others. To survive, he used his resourcefulness in another way, luring the other crocodiles into traps so he could kill them and take their food. Before long, he was the only crocodile left. With nothing left to eat, Amascut promised him a lifetime supply of food in return for his service. He willingly agreed.