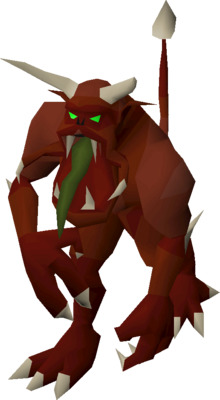 Zakl'n Gritch is one of K'ril Tsutsaroth's bodyguards, along with Balfrug Kreeyath and Tstanon Karlak. Zakl'n Gritch attacks with Ranged and has a maximum hit of 21. His fearsome appearance and power over ice have earned him the nickname "Scourge of the Light", being a prominent soldier in Zamorak's army. He attacks by throwing large snowballs.

Zakl'n Gritch is considered a lesser demon for the purpose of a Slayer task. As with most demons, he is susceptible to the effects of demonbane weapons.

Drop rates estimated based on 12,127 kills from the Drop Rate Project, unless otherwise cited.