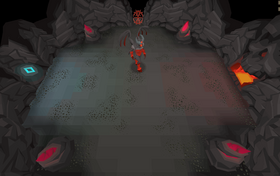 An overview of Zalcano's prison. To the west, the blue altar. To the east, the red furnace. In the corners, the four rock formations. 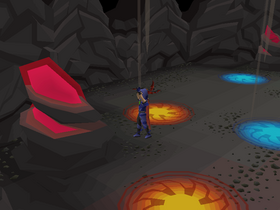 A player mining a glowing rock formation. The falling debris above the player indicates that a boulder is about to fall on top them.

In order to remove Zalcano's armour, and mine her when it's removed, players must make imbued tephra and throw this at her. 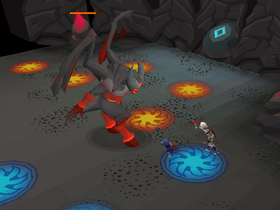 Throwing imbued tephra while standing under a blue demonic symbol will increase the player's accuracy and damage. 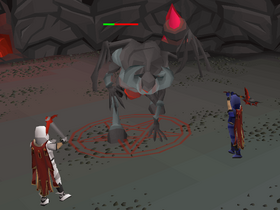 A player mines Zalcano after breaking her stone armour.

Zalcano has six different attacks that the player must watch out for as they attempt to take on the stone demon. Each of the attacks are performed at random intervals throughout the fight.