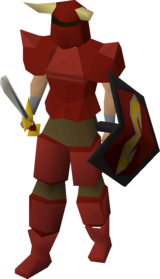 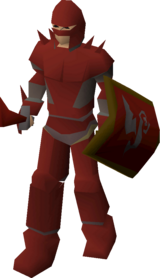 Zamorak warriors are the warriors of ZMI and currently guard the Ourania Altar, found at the end of the Ourania Cave.

They can be safespotted using the various small lava vents in the cave, however it is suggested to wait until they are tolerant as the nearby Zamorak rangers and mages can attack you.

Zamorak warriors are commonly killed for their rune scimitar drop, having a significantly higher drop rate than other common monsters such as fire giants.

Drop rates estimated based on 113,032 kills from the Drop Rate Project, unless otherwise cited.