The Zamorakian spear is currently the strongest spear in the game. It is popular among players because of its versatility; it has stab, slash and crushing options, making it useful on a wide array of monsters. Most notably, it is the strongest spear to use against the Corporeal Beast.

Overall, this weapon's total defence bonuses are the highest for any weapon. Many players consider this weapon to be an upgraded dragon spear because both of these spears have the same special attack, though they have different attack speeds, and the Zamorakian spear cannot be poisoned. Additionally, the Zamorakian spear's stab bonus outweighs its other bonuses, unlike the dragon spear's balanced stats.

Otto Godblessed can convert the spear into a Zamorakian hasta for 300,000 coins, or 150,000 coins if the player has completed the Elite Kandarin Diary. Reversing the hasta into a spear can be done for free by talking to Otto Godblessed again. The hasta has the exact same stats as the spear, but it is one handed and thus can be used with a shield or defender. This makes the spear inferior to its hasta variant in virtually every situation, except when fighting the Corporeal Beast, as it is weak to spears but not hastae. The hasta can then further be modified to a dragon hunter lance by combining it with the hydra's claw. 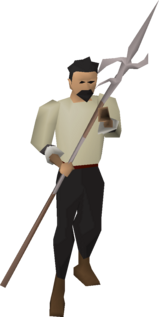 The Zamorakian spear has a special attack, Shove, which it shares with the dragon spear and Zamorakian hasta. It pushes an opponent back and stuns them for three seconds, consuming 25% of the player's special attack energy.

The effects of this special are non-stackable, meaning that players cannot use the spear's special attack on a target who is already stunned. In addition to this, players are given a one tick (0.6 seconds) period of immunity after a stun wears off in which they cannot be stunned again.

In addition, it cannot be used against large monsters, such as giants, because they are too big to push back. If a player tries this, the special attack does not occur and no special attack energy is consumed. A message appears in the chat box, reading, "That creature is too large to knock back!" A general way to tell if the spear can use the "Shove" special attack is to determine how much space the target monster takes up. If it takes up more than one space, it cannot be shoved. For example, a player can shove an ice warrior, which takes up one space, but not an ice giant, which takes up four.