From Old School RuneScape Wiki
Jump to navigation Jump to search
The RuneScape Wiki also has an article on: rsw:Zanik
Zanik? (edit) 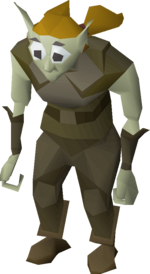 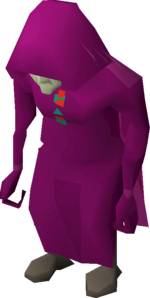 Zanik is a cave goblin who is called up to explore the surface during the Death to the Dorgeshuun quest. Being the first of her kind to view the surface above, she's a curious and eager sort. Her preferred weapon is the Dorgeshuun crossbow.

Death to the Dorgeshuun[edit | edit source]

Zanik is tasked to be the first cave goblin to visit Lumbridge as well as defend the Dorgeshuun city from a H.A.M. plot. She nearly loses her life while infiltrating the H.A.M. Hideout, but the player later revives her with the Tears of Guthix.

Another Slice of H.A.M.[edit | edit source]

In Another Slice of H.A.M., Zanik accompanies the player again. She meets the tribe of Goblin Village and is later captured by Sigmund, tied to a railway track. She is nearly run over, but the player saves her in time.

Land of the Goblins[edit | edit source]

In the first part of Land of the Goblins when you're escorting Grubfoot to Zanik she is found at the same level as the entrance from the mines, to the very north-west.

Near the end of the quest, she is sucked into the Strange box and her whereabouts are unknown.