The Zaryte bow is a two-handed ranged weapon that requires level 80 in Ranged to wield. One of the proposed rewards from Nex, it is only available from the tournament supplies table in a tournament world as a test weapon for players. As a Zarosian item, it will grant god protection towards Zarosian NPCs in the God Wars Dungeon.

The Zaryte bow has an attack range of nine, and is able to fire any type of arrow. In addition, the bow does not degrade, though it possesses a passive effect that consumes charges, similar to how an uncharged infernal axe acts as a regular a dragon axe. 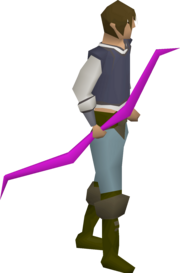 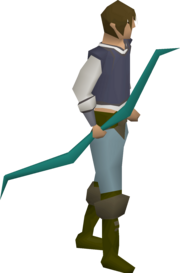 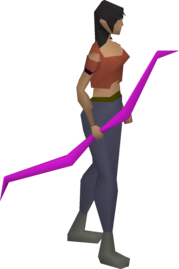 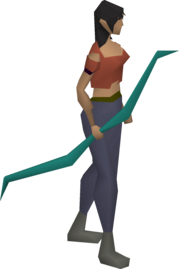 The Zaryte bow has a passive effect that requires nihil shards to use, with one shard giving it 100 charges. When in a multicombat area, a target standing within two tiles of the main target will also get hit; wearing Zaryte vambraces will allow players to hit up to three targets within range of the main target. This consumes one charge per attack, and does not consume an additional arrow.

Unlike chinchompas, the Zaryte bow's damage for each target is rolled independently, both for accuracy (based on the player's attack bonuses versus the NPC's defence bonuses) and damage.

The Zaryte bow was one of the original rewards from Nex upon its release in RuneScape. Compared to Old School RuneScape's version of the bow, the original Zaryte bow had several differences: