Zeah is a large continent accessible only to members that is found west of the mainland. First reached by speaking to Veos in the northernmost pier of Port Sarim, it is comprised of the Kingdom of Great Kourend, the Kebos Lowlands and the Kingdom of Varlamore. However, only the first two are currently accessible to players.

Although the name Zeah has fallen out of usage within the game, being removed from the world map with the release of Tale of the Righteous and then from dialogue with various NPCs (such as Veos and Roy jr.) with the release of the Kebos Lowlands, it is still used by Jagex Moderators and players to refer to the continent as a whole. 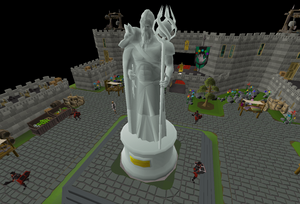 The statue of King Rada I, the founder of Kourend.

Great Kourend is a kingdom within Zeah. It was formed over 1,500 years ago by King Rada I, who united the five Houses into one kingdom. Kourend is currently ruled by the Kourend Council.

Great Kourend is split into five cities (sometimes referred to as Houses), with each in charge of a specific aspect of running the kingdom.

Beneath Great Kourend lies the Catacombs of Kourend, a massive cave system full of slayer monsters, demons, dragons and undead. It can be accessed by investigating the statue of King Rada I in the Kourend Castle courtyard. 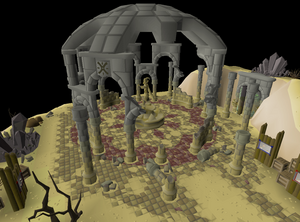 The summit of Mount Quidamortem, containing some ruins of a temple once dedicated to Xeric.
Main article: Kebos Lowlands

The Kebos Lowlands is a region found west of Great Kourend. It is primarily inhabited by lizardmen in the areas directly surrounding Mount Quidamortem. To the north of Mount Quidamortem, the soil found within the area is extremely fertile, attracting farmers of Hosidius. Here, the Farming Guild can be found, while further north lies Mount Karuulm, where the Tasakaal and Kahlith reside. In addition, Lake Molch is located within the area.

Varlamore is a currently inaccessible kingdom found south of the Kebos Lowlands. Founded by refugees fleeing from Great Kourend during the Age of Strife 1,030 years ago, there are four known areas within the kingdom: 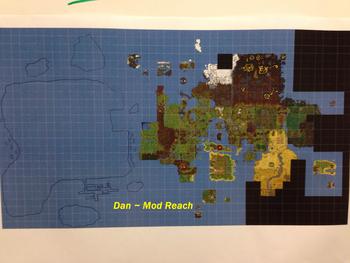 A rough outline of the land mass's proposed size.

The concept of a brand new continent was first pitched by Mod Reach on 26 April 2014 in a Reddit post on the subreddit /r/2007scape, where he laid out his plans for a new land mass that expanded the existing world map by 50% with an "uber quest". After two months, a Developer's Blog was released on 30 June 2014, pitching three new areas in the continent: Port Roberts, a large floating platform town, Civitas illa fortis, a large Roman-themed town and the Colosseum, a large arena akin to RuneScape's now-removed Duel Arena Tournament. 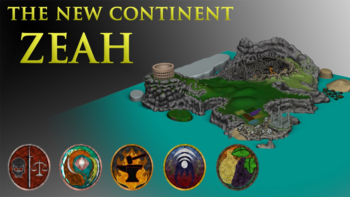 A concept art of Zeah, including areas pitched in the Developer's Blog.

A newspost was released on 31 October 2014, bringing two Developer's Blogs: an Achievement Diary expansion and the new continent, Zeah.

The blog included the existing concepts from the Continent Expansion blog, with three new areas:

Zeah was then put on a poll a week later in the Old School New Continent, Achievement Diaries and Poll poll, having received 90.4% of the yes votes.