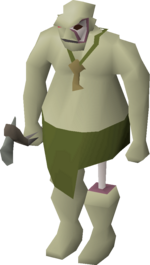 Zogres are encountered during the Zogre Flesh Eaters quest and live south of Castle Wars. When burying their bones a Skogre may appear and attack. Their name is a portmanteau of 'zombie ogre'.

Zogres are almost immune to normal weapons (you will hit just as often, but damage is reduced by 80%, Halberd of any kind recommended to strike from distance), but Brutal arrows are effective against them, as is the Crumble Undead spell (damage is halved, for a maximum of 8). Also, poison works full power, so p++ weapons might be good against them.

They can also infect you with Disease, but you may counteract this with Relicym's balm or Sanfew serum, which may be bought from Uglug Nar outside Jiggig for 200 coins (Relicym's balm only), or made using Herblore. An Inoculation bracelet will protect you as well, but it will just hold the damage away. After the disease has come to 3 points of damage a time, the bracelet is gone.